LAS VEGAS, NV - After a long and thrilling title fight that began the first full weekend in January, Monster Energy AMA Supercross, an FIM World Championship, came to a dramatic conclusion with its 17th and final race on Saturday night in front of a sold out crowd of 39,509 inside Sam Boyd Stadium. Nine points sat between Team Red Bull KTM Factory Racing's Ryan Dungey and Monster Energy Kawasaki's Eli Tomac entering the night, but when the dust settled after a thrilling 450SX Class Main Event, it was Dungey who walked away with his fourth title, and his third in a row. Rockstar Energy Husqvarna Factory Racing's Jason Anderson took the Main Event win, his first of the season.

In the 250SX Class, a title was on the line for the Eastern Regional Championship in the annual East/West Showdown. After one of the wildest and most memorable races in the history of the division, Monster Energy/Pro Circuit/Kawasaki's Adam Cianciarulo walked away with the Main Event win, but it was Rockstar Energy Husqvarna Factory Racing's Zach Osborne who emerged with his first career title after battling back from a first-turn crash. 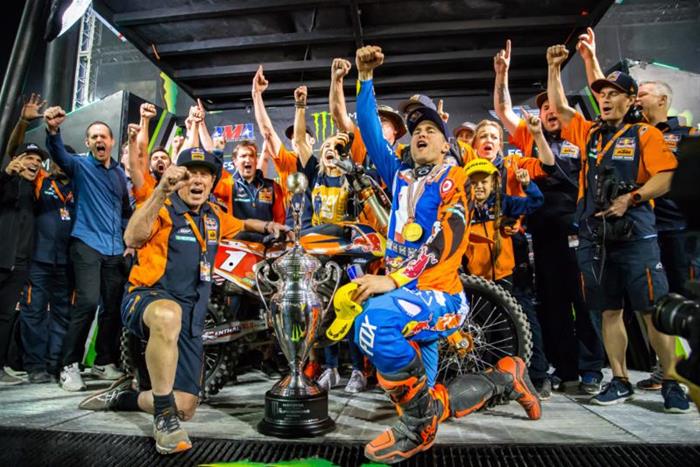 The highly anticipated 450SX Class Main Event got underway with RMATV/MC-WPS-KTM's Blake Baggett edging out Dungey for the SupercrossLive.com Holeshot. Dungey used the momentum of an outside line to quickly move into the lead, while Tomac fought his way into third behind Baggett. With his championship rival out front, Tomac wasted little time in working his way around Baggett for second.

Tomac's push continued into Lap 1 when he made an aggressive pass on Dungey, who took counter action to avoid contact and ended up losing another spot to Anderson, dropping to third. It was then Anderson's turn to apply pressure on the lead. He stalked Tomac for several laps, and even briefly nosed his Husqvarna to the front, but his aggressiveness allowed Dungey to close back in and take over second on Lap 4. The race stabilized a bit at that point, with Tomac enjoying a multiple-second lead, but as the 20-minute-plus-one-lap Main Event neared the halfway point Dungey began to close back in on his rival.

A miscue in a rhythm section on Lap 14 allowed Dungey to surge past Tomac and back into the lead, but the Kawasaki rider stayed right on his rear fender. A short time later Tomac dove to the inside of Dungey, forcing contact and sending the KTM rider off the track. As Tomac reclaimed the lead, Dungey was forced to safely reenter the track and did so without losing a spot, but came out just in front of Anderson. At this point in the race, the top six riders sat within three seconds of another, adding to the tension both on the track and in the stands.

Veteran Chad Reed made his presence felt on Lap 17, working his way into the lead group and passing Anderson for third. However, in the final turn before the finish Anderson attempted to retake the position, forcing heavy contact with Reed and sending the Monster Energy/Yamalube/Chaparral/Yamaha Financial Services/Yamaha Factory Racing rider off the side of the track. Reed would reenter the race in sixth. The incident also allowed Monster Energy Kawasaki's Josh Grant to briefly take over third from Anderson, but the Husqvarna rider fought back and reclaimed the position.

As the field took the white flag for the final lap the capacity crowd rose to its feet as Dungey continued to manage about a bike-length deficit to Tomac, seemingly waiting for a final opportunity to make a move and potentially steal the win. As the leaders approached the track's lone triple jump for the final time Tomac went high and suddenly dropped off the pace, which allowed Dungey to easily move back into the lead. Tomac's brief slowing appeared to be intentional as he jumped right behind Dungey and came in with another aggressive pass in the next corner. The two made contact again, forcing both to stop completely and nearly go off the track. That allowed Anderson to dive under the lead pair and jump from third to first with just a few turns remaining. Grant briefly followed into second, but Tomac regained his momentum and got back by. Dungey received the worst of the situation, falling from second to fourth, but he kept his KTM on two wheels and settled for the spot he needed in order to ensure the title.

Anderson went on to take an unexpected win, the third of his career and his first of the 2017 season, by 1.8 seconds. Tomac followed in the runner-up spot after leading 17 laps, with Grant claiming his first podium finish of the season behind his teammate in third. Needing a finish no worse than fourth, Dungey brought his KTM home just off the podium.

Jason Anderson earned his first win of the 2017 season. 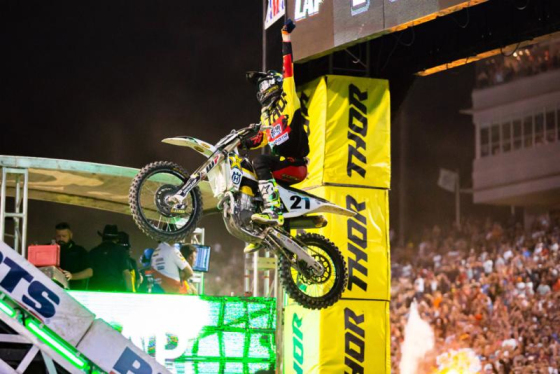 Dungey shared his frustration with the Kawasaki teammates for their race tactics after crossing the finish, but a fourth Monster Energy Supercross Championship was his.

"That was a season of never give up. It was tough from the get go, but we did it," said Dungey, who was forced to wrap up the title in Las Vegas for the first time in his career. "In the last race [of the season] I didn't expect it to be like that. I expected it to be a clean race, but those cheap shots were unbelievable. But, we survived it and we got through it. It's [more gratifying]. We didn't win the most races [this season], but the points are what matter at the end. We fought hard, tooth and nail. This was these most challenging and the hardest season of my entire career. It's just nice to be here and sit on top."

Dungey is the fifth rider in Monster Energy Supercross history to win three consecutive 450SX Class titles. He also becomes just the fourth rider in the history of the sport to win at least four championships, joining Ricky Carmichael, Jeremy McGrath, and Ryan Villopoto. His three wins are the lowest for a champion since Jeff Stanton won the same amount in 1992. Alternatively, Tomac's nine wins are the most for a rider that failed to win a title since Damon Bradshaw won the same amount, also during the 1992 season. Dungey and Tomac finished the season separated by just five points. It's the smallest gap between first and second since 2011 when Villopoto won the title by four points over Reed.

Tomac (3) and Dungey (1) put on a show for the sold out crowd in their duel for the title. 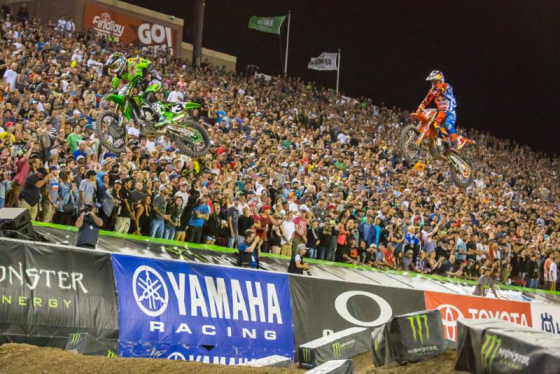 The 250SX Class East/West Showdown kicked off with Cianciarulo storming to the SupercrossLive.com Holeshot, just ahead of his teammate Joey Savatgy and Troy Lee Designs/Red Bull/KTM's Jordon Smith, the Eastern Regional points leader. This trio, along with Osborne, entered the night mathematically eligible to win the title and while three of the four sprinted out to an early lead, Osborne found himself picking up his Husqvarna off the ground following a first-turn crash that collected several riders. Osborne began his race at the tail end of the field, completing the first lap in 21st.

The clear track allowed Cianciarulo to sprint away, but Savatgy kept pace. As they crossed the line to officially start the first lap, Savatgy washed out his front end in the first corner and went down. That allowed Smith to take over second, with Rockstar Energy Husqvarna Factory Racing's Martin Davalos moving into third.

The Lap 1 excitement sparked again when Smith went off the side of the track while running second. He kept his KTM on two wheels, but lost several positions and reentered the race in fifth. That moved Davalos into second and Monster Energy/Pro Circuit/Kawasaki's Justin Hill, the newly crowned Western Regional Champion, into third. Davalos would encounter misfortune on Lap 2 and fall out of contention, moving Hill into second and 51Fifty Energy Drink Yamaha's Hayden Mellross into third. Smith endured even more misfortune of his own on the same lap, suffering a frightening crash that would bring his race to an end and eliminate his hopes of a first career title.

With Cianciarulo in full control of the race out front, Savatgy running in fourth, and Osborne slowly working his way back into the mix in 20th, the championship intrigue was only beginning. Over the middle portion of the 15-minute-plus-one-lap Main Event both Savatgy and Osborne began heading in opposite directions. Savatgy, who controlled his own destiny in the title fight, continued to lose ground to the riders behind him, falling from fourth to seventh on Lap 5. Meanwhile, Osborne was charging through the field and broke into the top 15. Savatgy would lose another position and fall to eighth three laps later.

With the Main Event winding down, Savatgy's vulnerable hold of the championship lead left him with just a single-point advantage over Cianciarulo as they ran on track, while Osborne's continued improvement also allowed him to close to within single digits of the points lead. On Lap 12 Osborne valiantly fought his way into ninth, with only Savatgy sitting between he and his first career title. A large gap sat between the two as the time on the Main Event clock expired, but with one additional lap remaining the Husqvarna rider was able to make a charge to Savatgy's rear fender and within striking distance on the final lap.

Cianciarulo dominated the race and posted a wire-to-wire effort to capture his second victory of the season, likely unaware of the bedlam ensuing behind him. He crossed the line 5.7 seconds ahead of Hill, while Yamalube/Star Racing Yamaha's Aaron Plessinger made an impressive climb from a 15th-place start to round out the podium in third. As they approached the final set of whoops on last time, Osborne committed to making a pass attempt on Savatgy for seventh and did just that, diving to the inside of an unsuspecting Savatgy and drawing heavy contact that ripped Savatgy off the back of his Kawasaki after it briefly hooked onto Osborne's Husqvarna. Osborne continued, leaving Savatgy to pick up his bike, and ultimately clinched a title that didn't seem possible after the opening lap.

Zach Osborne overcame a crash in the first turn to clinch an unlikely East Region title. 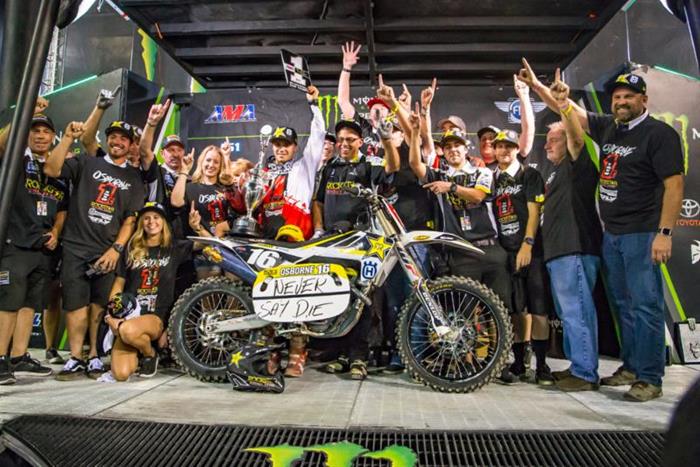 "I can't believe I came from that far back. I was down in the first turn. Not just down, but down for a long time. It's just unreal," exclaimed Osborne. "I can't believe I made that pass. I could see him [Savatgy], but he was so far away in my mind. To come back and pass him with one corner to go is unreal. I've worked my whole life to be here. There's just so many people that have shaped and molded my career to get me to this point, and I just cant thank them and my team enough."

Osborne's seventh-place finish, coupled with Cianciarulo's win, left them just two points apart in the final standings. Cianciarulo entered the night 14 points out of the lead, while Osborne and Savatgy sat just a single point behind Smith. Savatgy ended up 12th, and wound up seven points back.

Osborne became the 53rd different 250SX Class Champion in Monster Energy Supercross history, and gave the Husqvarna brand its first ever title in the division.

Adam Cianciarulo dominated en route to his second win of the season. 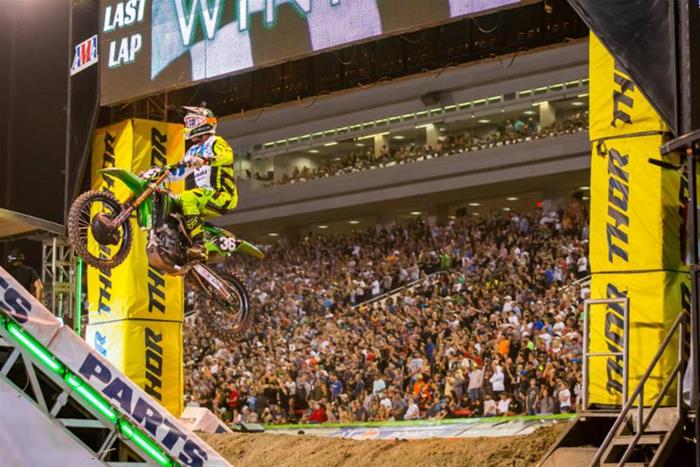 About the American Motorcyclist Association
Founded in 1924, the AMA is a not-for-profit member-based association whose mission is to promote the motorcycle lifestyle and protect the future of motorcycling. As the world’s largest motorcycling rights and event sanctioning organization, the AMA advocates for riders’ interests at all levels of government and sanctions thousands of competition and recreational events every year. The AMA also provides money-saving discounts on products and services for its members. Through the AMA Motorcycle Hall of Fame in Pickerington, Ohio, the AMA honors the heroes and heritage of motorcycling. For more information, visit www.americanmotorcyclist.com.