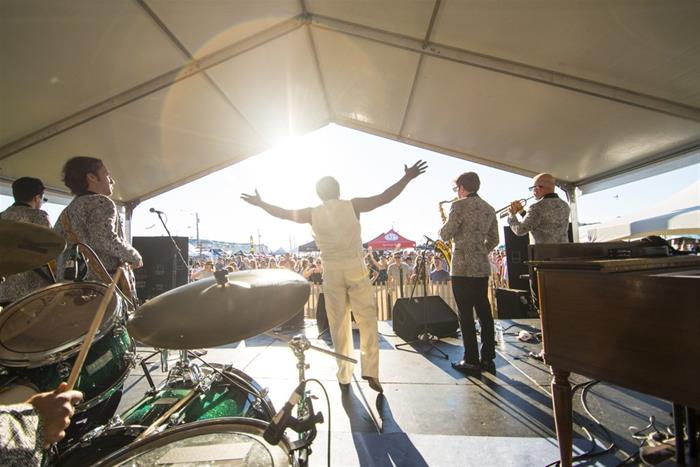 What started out as a raw spring morning turned into an ephemeral Summer day shortly after the gates opened on Saturday. The event began with the Hop Sauce Tune Up, a paddle race at the adjacent Beach Haven waterfront. Despite the challenging wind, dozens of paddlers raced to kick off the festivities.

This year’s festival had 12 amazing local eateries serving up Long Beach Island favorites, highlighted by The Chicken or the Egg and the newly opened Parker’s Garage and their lobster corn dog. Festival goers had the opportunity to try 25 hot sauces and spicy offerings with their food.

The music line up, which included LBI locals and indie acts from Charleston, and Nashville, was the most diverse yet. The Hardwork Movement, a hip-hop crew from Philadelphia, brought a new flavor to the festival, while SUSTO’s Americana and ELEL’s world pop were a perfect afternoon sounds. Soul crooner, Lee Fields and the Expressions headlined the event with a message of love as the sun began to set over the bay.

The Jetty Rock Foundation will again donate $25,000 in proceeds to community initiatives. $20,000 will be donated to an Island-wide Oyster Shell Recycling Program, which collects oyster shells from restaurants and delivers them to shellfish harvesters who aim to bring back the oyster population in the southern end of the Barnegat Bay. The soon-to-be-released The Oyster Farmers documentary details the lost culture of the local oyster population, its resurgence, and the overall effort to improve water quality. A $5,000 donation will be made to the Borough of Beach Haven for parks and recreation to subsidize the 2016 donation for a pavilion which is currently under construction.

Hop Sauce Festival would like to thank the volunteers, sponsors, and fans alike for contributing to the Jetty Rock Foundation’s largest fundraiser.