IRVINE, CA – June 13, 2017 – The American International Motorcycle Expo presented by Nationwide (AIMExpo) will welcome Harley-Davidson Motor Company (Harley-Davidson) to the 2017 show floor for its inaugural appearance with its new 2018 models this September 21-24. Interactive demo rides and its JUMPSTART™ Rider Experience will also be available to attendees when the fifth-annual event gets underway from the Greater Columbus Convention Center in Ohio. 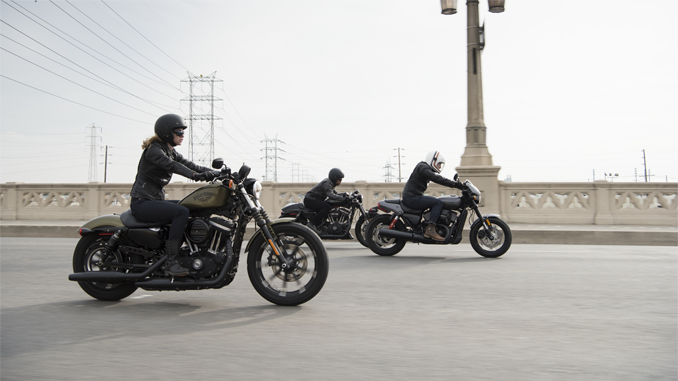 As the annual nexus for the motorcycle and powersports industry in the world’s largest recreational market, the Motorcycle Industry Council produced AIMExpo presented by Nationwide provides a key stage for Harley-Davidson to share both its new 2018 models and its vision for creating the next generation of riders. Recently, Harley-Davidson unveiled key long-term objectives that include building two million new riders over the next ten years in the U.S., as well as launching 100 high-impact motorcycles during the same window through 2027.

“AIMExpo offers a unique and timely opportunity for Harley-Davidson to share our new high-impact 2018 models with consumers, media and the broader industry, in one place at one time,” said Anoop Prakash, Harley-Davidson U.S. Marketing Director. “We look forward to presenting both new and seasoned riders an opportunity to test ride our exciting 2018 line-up in Columbus, Ohio, as we pursue our objectives to grow ridership across the United States.”

“The addition of the iconic American brand Harley-Davidson very much completes the grand stage that AIMExpo presented by Nationwide represents for American industry in a global setting,” Mike Webster, Sr VP MIC Events. “The history and innovation of motorcycling in America will be very well represented this September in Columbus with Harley-Davidson, the longest continually manufactured domestic brand, and we’re genuinely excited to honor the past while looking to the future as they join the industry on the show floor and at AIMExpo Outdoors!.“

Along with the Milwaukee-based manufacturer, 41% of powersports dealers and 50% of the US population reside within 500 miles of AIMExpo presented by Nationwide’s new location in the city of Columbus. This central location and ease of access offer all attendees the opportunity to engage with the motorcycle and greater powersports industry like never before.

With hundreds of exhibitors contracted and more than 75% of the show floor now full, companies looking to exhibit are encouraged to contact AIMExpo presented by Nationwide for more information before it’s too late.

About the Motorcycle Industry Council

The MIC is headquartered in Irvine, California, with a government relations office in metropolitan Washington, D.C. First called the MIC in 1970, the organization has been in operation since 1914. Visit the MIC at www.mic.org.

Nationwide, a Fortune 100 company based in Columbus, Ohio, is one of the largest and strongest diversified insurance and financial services organizations in the U.S. and is rated A+ by both A.M. Best and Standard & Poor’s. The company provides a full range of insurance and financial services, including auto, commercial, homeowners, farm and life insurance; public and private sector retirement plans, annuities and mutual funds; banking and mortgages; excess surplus, specialty and surety; pet, motorcycle and boat insurance. For more information, visit www.nationwide.com.

Nationwide, Nationwide is on your side and the Nationwide N and Eagle are service marks of Nationwide Mutual Insurance Company.