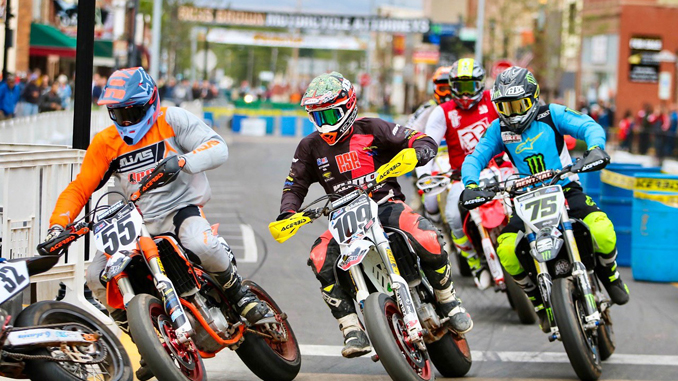 “Supermoto is an exciting form of motorcycle racing, for competitors and spectators,” said AMA Track Racing Manager Ken Saillant. “We look forward to some excellent racing in some great venues in the United States and Canada this year.”

Supermoto is a mixture of street-style racing and motocross in which racers compete on a track that combines dirt and pavement and includes jumps and sliding through turns. Track venues can range from football stadiums to closed-course streets to parking lots.

The series, sanctioned by the AMA and promoted by DRT Racing Inc., crowns professional and amateur champions and features four classes: the Pro Open class, the Pro Lites class, the Amateur National class and the Sportsman class.

“We are honored to have this opportunity in bringing supermoto to the people for the next three years,” said Alex Mock, president of DRT Racing Inc.

The series also is sanctioned by FIM North America as the FIM NA Supermoto Continental Championship.

“FIM North America is very pleased to continue its association with DRT Racing Inc. in the promotion of the FIM NA Supermoto Continental Championship,” said Marilynn Bastedo, president of FIM North America. “We are especially glad that a round will take place in each of the two FIM NA member countries, encouraging participation by Canadian riders, as well as Americans.”

About the American Motorcyclist Association
Founded in 1924, the AMA is a not-for-profit member-based association whose mission is to promote the motorcycle lifestyle and protect the future of motorcycling. As the world’s largest motorcycling rights and event sanctioning organization, the AMA advocates for riders’ interests at all levels of government and sanctions thousands of competition and recreational events every year. The AMA also provides money-saving discounts on products and services for its members. Through the AMA Motorcycle Hall of Fame in Pickerington, Ohio, the AMA honors the heroes and heritage of motorcycling. For more information, visit www.americanmotorcyclist.com.