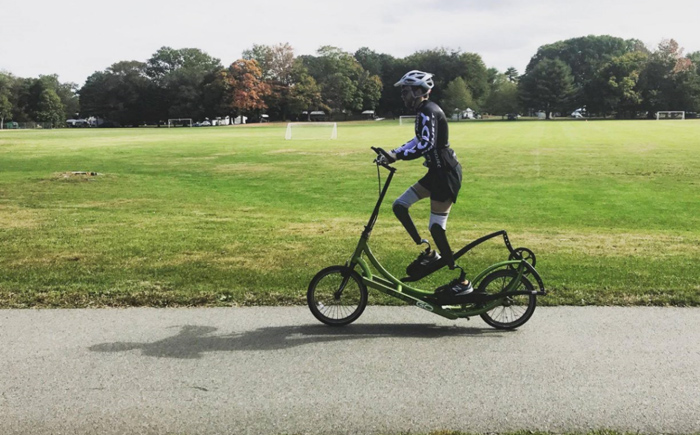 With 20,000 bikes sold since its founding, an equity crowdfunding record broken and countless inspiring customer stories, ElliptiGO looks back on a year marked by innovation and achievement and aims to continue the momentum in 2018.

“We are proud of what we achieved in 2017. We’ve continued to grow the sport of elliptical cycling globally and to see it recognized as a powerful and effective exercise for all people, young and old, elite and recreational, due to its low impact and fun nature,” said Bryan Pate, ElliptiGO CEO. “The numbers, feedback and inspiring stories speak for themselves. We’re poised to continue making waves this year.”

Taking Over the Streets
ElliptiGO continued its sales success, having sold its 20,000th bike in 2017. ElliptiGO bikes are now on the road in 60 countries around the world, demonstrating continued consumer enthusiasm for elliptical cycling.

Arc Line Expanded
ElliptiGO introduced two new products in 2017, expanding their popular compact-stride line to 3 models. One of the new models, the Arc 3, is the first ElliptiGO bike priced below $1,000 and the other, the Arc 24, has the most gear range of any elliptical bike on the market.

Equity Crowdfunding Record Achieved
In February, ElliptiGO closed on one of the most successful Regulation CF fundraises in history. In only 59 days, ElliptiGO received $1,281,378 in commitments from 589 individuals. ElliptiGO was the 8th company ever to receive more than $1 million in commitments and set a new record for the highest average commitment amount in a fully-subscribed Regulation Crowdfunding offering, becoming the first such offering to average more than $2,000 per investor.

Elite Athletes Notch Top Performances
ElliptiGO spokesperson and four-time Olympian Meb Keflezighi ran his final race at the New York City Marathon, closing out his career in spectacular fashion in 2:15:29, good for 11th overall and second American. Meb is the only runner to ever win an Olympic medal, the New York City Marathon and the Boston Marathon, making him one of the greatest American distance runners of all time.

The Cal International Marathon was host to the US Championships this year and was highlighted by wins from two ElliptiGO athletes. Sara Hall ran 2:28:10, an impressive effort after running a personal record just 5 weeks earlier at the Frankfurt Marathon (2:27:21). Tim Ritchie won in 2:11:56, which was a remarkable 4 minute personal record after 3 years of injuries.

Rewriting the Record Books
Numerous elliptical cycling records were achieved in 2017, proving there are no limits to what can be done on an ElliptiGO bike. A few of these records include:
Brian Reynolds, who had a limited marathon build up and relied heavily on the ElliptiGO bike to supplement his training, set the official bilateral below-the-knee amputee world record at the Chicago Marathon with a 3:06:31.

British athlete Tim Woodier became the first person to “Everest” with an ElliptiGO bike. The feat requires a rider to climb the equivalent height of Mount Everest - 29,029 feet (8,848 meters) - in one ride.

Emma Timmis, also of Britain, set a new Guinness World Record for the longest journey ever undertaken on an elliptical bicycle in one country. She rode 4,941 miles (7,951.9 kilometers) across Australia.

Overcoming All Odds
Perhaps the most meaningful achievements of 2017 were those of personal triumph. Countless ElliptiGO customers shared their courageous stories, including Lyn Huston, who lost 89 pounds to reclaim her health, and Lucia Hagy, who regained her active lifestyle with ElliptiGO after beating breast cancer.