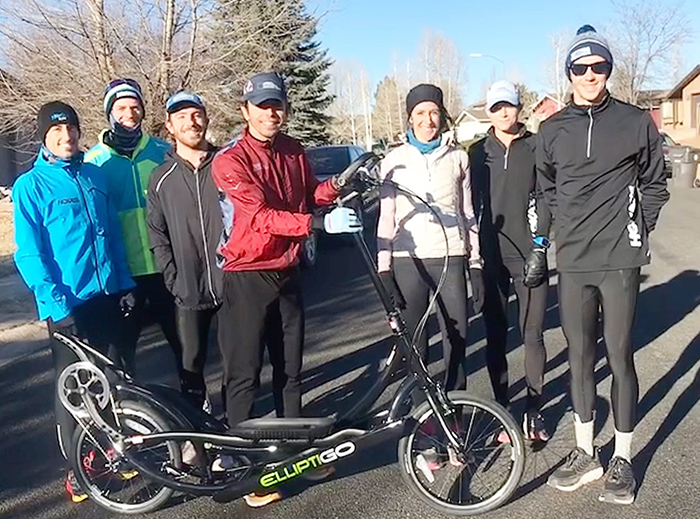 Following the success of individual athlete sponsorships, ElliptiGO is raising its level of support for professional distance running team, HOKA Northern Arizona Elite, with a team product sponsorship. The Flagstaff, Arizona-based team will incorporate ElliptiGO-integrated training to supplement their running without added impact. Long-time ElliptiGO-sponsored athletes Stephanie Rothstein Bruce and Matt Llano have enjoyed great success after adopting the elliptical bike into their training regimens, and the rest of the team looks forward to similar gains as they prepare for their spring competition season.

Head Coach Ben Rosario said, “We’ve had our ElliptiGO for a few weeks and have already put a good number of miles on it. It’s been an awesome tool for athletes we want to transition into higher mileage. They can get several afternoon ElliptiGO sessions per week in place of a run. That helps the body prepare to train twice a day, every day, in a safe way. And it’s more enjoyable than other cross training we’ve tried in the past.”

HOKA NAZ Elite was founded by Rosario, who wanted to harness a culture of top distance runners in one of the biggest altitude training hubs of the country. Located at about 7,000 feet altitude, Flagstaff is significantly higher than other popular altitude hubs like Boulder, Albuquerque or Salt Lake City. Since the team originally formed in 2014, athletes in this program have been performing at the highest level of the sport at World Major Marathons and World Championship events.

The team looks to compete on the track this winter season as well as the USA Cross Country Championships, with Bruce eyeing another strong performance after qualifying for last year’s World Championship in Uganda. Bruce will also compete in the London Marathon and Scott Smith will take on the Boston Marathon.

NAZ Elite joins hundreds of other professional athletes and over 200 schools that are already using ElliptiGO-integrated training to perform at the highest level of the sport. ElliptiGO is proud to support this group of athletes in the 2018 season and beyond as they prepare for future World Championships and Olympic Games.