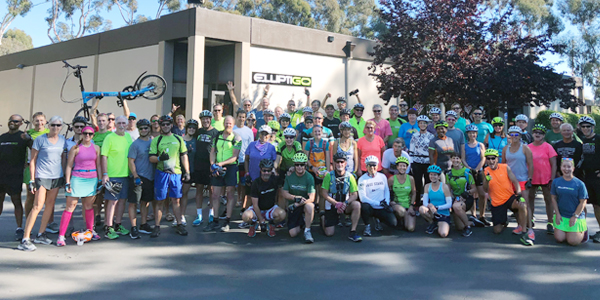 ElliptiGO Inc., the pioneer and world leader in stand up cycling, welcomed customers from around the world for the ninth annual ElliptiGO Rally Weekend. The weekend’s events were headlined by the Elliptical Cycling World Championships, which took athletes up Palomar Mountain in North San Diego County. The 11.69 mile route rises 4,209 feet to the summit at an average grade of 7%. Rusty Snow took top honors for men for the seventh year in a row, finishing in 1:12:21. Whitney Krempin placed first among women with a time of 1:38:41. Jeff Caron and Bryce Whiting joined Snow on the men’s podium. Laura Hagley and Kristin Schliecher joined Krempin on the women’s podium.

More than 100 ElliptiGO enthusiasts gathered in the stand up cycling brand’s hometown for three days of comradery and riding. The gathering began with a reception at ElliptiGO World Headquarters on Friday afternoon. Following the World Championships on Saturday morning, riders of all experience levels and abilities took to the streets of Solana Beach for rally rides of varying distances. Following the ride, ElliptiGO community leaders welcomed riders to an awards ceremony and celebratory dinner.

The awards ceremony honored victors from various Global ElliptiGO Riders Club challenges, the world championship podium finishers, and inspiring members of the ElliptiGO community. The 2018 Authentic and Inspiring Awards went to two deserving individuals. Idai Makaya received the award for completing his world-record ElliptiGO ride across Great Britain and for inspiring the community through the Longest Ride Challenge, both of which honored his late brother Garai. Brian Reynolds was also a recipient of the award. Reynolds is a billaterial below-the-knee amputee who uses his ElliptiGO bike during marathon training. Reynolds holds the world record for the marathon amongst bilateral below-the-knee amputees and is working towards an amazing goal of breaking three hours.

“Between the fun, friendly group rides through our community and the challenging, intense World Championship climb, the versatility of our products and the friendship that comes with owning an ElliptiGO bike are on display throughout rally weekend,” shared ElliptiGO CEO Bryan Pate. “Bringing our customers together and learning about their unique stories inspires us to continue creating and innovating to help them pursue their goals.”
For more information on ElliptiGO or to find a dealer, visit www.elliptigo.com.