Swell Rising as Reef Hawaiian Pro Gets Set to Kickoff

Swell Rising as Reef Hawaiian Pro Gets Set to Kickoff 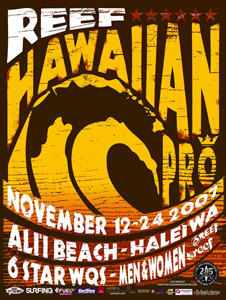 As the surf world continues to celebrate Fanning’s world title win in Brazil, all eyes now turn to the first stop of the Vans Triple Crown, the Reef Hawaiian Pro. From November 12-24, 2007 at Ali’i Beach Park in Haleiwa Town on Oahu’s famous North Shore, the world’s top men’s and women’s surfers will congregate for a shot at the Triple Crown, final WQS points and a piece of the $155,000 prize purse.

"With the Reef Hawaiian Pro kicking off the Triple Crown, as well as the penultimate WQS contest, this event sets the tone for a competitive surfers’ winter season. With an unusually slow start to the season so far, Haleiwa could be the break through event for a number of the pro contestants while getting the season in gear,” said Randy Rarick, Executive Director of the Vans Triple Crown of Surfing.

A northwest swell is expected to peak on the North Shore this Friday and Saturday, bringing with it head high to overhead surf. The current outlook forecasted on Surfline.com shows a potential for more energy out of the northwest with a larger swell possible Monday at the start of the Reef Hawaiian Pro.  Contest organizers are advising surfers to be ready to paddle out at 8:30AM on Monday.

With the first jewel in the Triple Crown and end of season WQS points on the line, the competition is sure to be intense. Andy Irons skipped the last WCT event, but is planning to be in Haleiwa to defend his 2006 Triple Crown Title. But, no one can lay early claim on the crown as North Shore local Sunny Garcia, a six time Triple Crown winner, returns to Haleiwa for his first surf event of the season and the 2007 World Champion Mick Fanning is expected to come in hot after winning the title in Brazil earlier this week.

“With the men’s world title wrapped up, the world’s looking to the Reef Hawaiian Pro to see if Fanning will continue to dominate,” said PJ Connell, Men’s Marketing Director at Reef. “Reef is proud to not only be sponsoring the first event of the Triple Crown, but also to have such a strong team of at least six surfers in the water waving the Reef flag.”

Flying in from various corners of the world, Reef team riders prepare to take center stage at the Reef Hawaiian Pro. Ben Bourgeois and Jay “Bottle” Thompson will be looking for the few last points to cap off their stellar, WCT qualifying seasons. Bobby Martinez will be flying in from Santa Barbara hungry for bigger waves and a shot at the Triple Crown. And look for NSSA and US Open Juniors champ, Tonino Benson, to step up again this season with a strong showing at Haleiwa.

The women’s contest will be no less vital as the final WQS points of the season are dealt out and Reef Team Rider, Sofia Mulanovich aims to not only defend her 2006 Triple Crown title, but also move to the top of the WCT ratings while in Hawaii.

Tune into the Reef Hawaiian Pro’s live webcast at reef.com or triplecrownofsurfing.com to find out who qualifies for next year’s men’s and women’s WCT as it happens. If you are on the North Shore from November 12-24, 2007, stop by Ali’i Beach Park to take in all of the action firsthand.