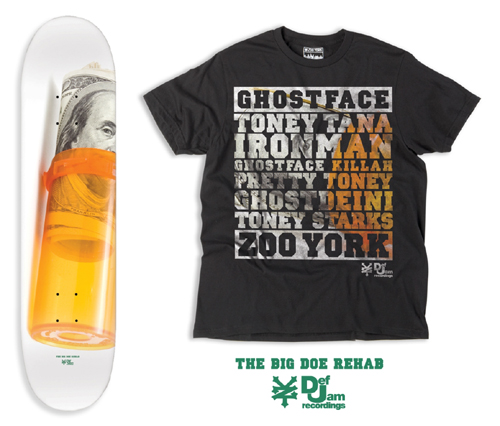 The Zoo York Institute, in association with Def Jam and Cornerstone Promotion, is proud to announce an exclusive collaboration that celebrates the recent release of Ghostface Killah’s critically-acclaimed new album, “The Big Doe Rehab.”

This highly-anticipated collab features a co-branded skateboard deck and T-shirt adorned with custom graphics that pay homage to Ghost’s new album, as well as the abundance of AKA’s the hip-hop icon has adopted over the past fifteen years.

Limited to less than 500 promo-only pieces and slated to release in early February 2008, these co-op collectibles will be available exclusively through in-store and online promos from Def Jam, Cornerstone, and of course, the Zoo.