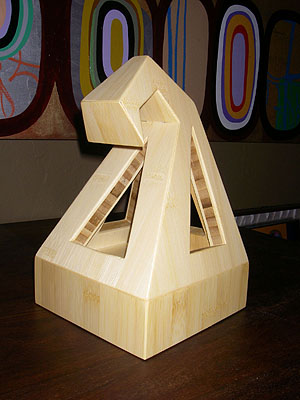 SIMA is proud to announce two exciting changes to the 2008 SIMA Image Awards ceremony. The ceremony will mark the unveiling of new handcrafted trophies, as well as welcome FUEL TV’s Pat Parnell as the official ceremony host. The 6th annual awards ceremony is scheduled for Friday, May 16, during Surf Summit 11 in Los Cabos, Mexico.

In striving to develop a unique trophy that would become the known as the iconic statue associated with the Image Awards, SIMA put out a call to various surf industry designers looking for original trophy ideas. After reviewing the proposals drafted by several designers, SIMA selected a ‘cubistic wave’ trophy design by Steve Fawley. The final piece is being handcrafted out of bamboo. A photo of the new trophy is attached.

“My love for the ocean, surfing, art and cubism is what inspired me to create this image,” said Fawley. “I wanted to create something unique, with meaning behind it, that represented the surf industry. The concept revolves around the wave – the foundation for our industry. The wave is executed in a cubistic style; as cubism revolutionized the 20th century culture, surfing has revolutionized the 21st century culture. On top of that, these trophies are awarded to brands and products that have revolutionized our industry. I am stoked to see everyone’s reaction to the trophies as I’m so honored to have been the artist to create this iconic image for SIMA.”

In addition, Fawley was inspired to create a more eco-friendly trophy. Each trophy has been meticulously handcrafted out of bamboo by Ben Wilko. An Aussie native and friend of Fawley, Wilko has been a carpenter for 10 years. Like Fawley, Wilko also has a passion for the ocean and surfing that connected him to this project. A big-wave surfer, Wilko has spent the past three winters on the North Shore and is a Waimea regular who is currently training to get ready for the winter big-wave season. SIMA was stoked to bring another surfer into the project.

“I have a passion for woodworking and love a challenge,” said Wilko. “When Steve brought me the design, some building friends of mine questioned if the trophy could be done in wood. After I made a mock-up I found it was possible – difficult, but possible. The 15 sculptures have over two thousand individual cuts and angles that made for a very time and labor intensive project, not to mention the sanding and finishing. I am stoked on the finished product and stoked to have collaborated with such a talented artist as Steve Fawley.”

The awards ceremony itself will be taken up a notch with the addition of FUEL TV’s Pat Parnell as the official host for the evening. Parnell is the host of FUEL TV’s “Daily Habit” and is a well-known action sports industry and television personality with a long list of hosting credits to his name. He has served as the play-by-play commentator for snowboarding during NBC’s Olympic coverage of the 2002 and 2006 games, and has been seen hosting a variety of action sports contests and shows including the Dew Action Sports Tour, the U.S. Open of Snowboarding, the Vans Triple Crown of Surfing events, ASP World Championship Tour events, and the MTV Sports and Music Festival.

“Hosting is one thing,” says Parnell. “Hosting an awards show in front of industry executives with an open bar on the beach is something entirely different. Obviously, I’m stoked. Besides, surfing Zippers with half of Orange County will be an honor.”