History Repeats Itself at the 2008 Surfer Poll and Video Awards 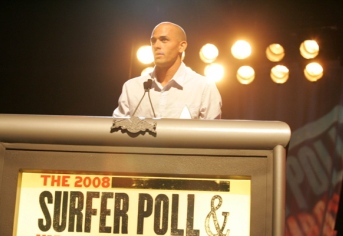 The masses have spoken and once again Kelly Slater and Sofia Mulanovich reign supreme in the ultimate annual election. The two accepted their awards last night at the 2008 SURFER Poll and Video Awards presented by Suzuki Auto at The Grove in Anaheim, California. The venue was packed to the brim, with several being turned away at the door due to a record-breaking over-capacity crowd. The other big winner of the night, claiming both “Movie of the Year” and “Documentary of the Year,” was “Bustin’ Down the Door” featuring surf legends Shaun Thomson, Peter “PT” Townend, and Wayne “Rabbit” Bartholomew.

The action began outside on the red carpet with celebrity sightings including Social Distortion frontman Mike Ness, Miami Ink’s Tim Hendricks, musical guest Mickey Avalon, Prison Break’s Dominic Purcell, Charger football legend Junior Seau and former Major League Baseball pitcher David Wells, alongside all the big-name pros. FUEL TV was on hand filming for an upcoming broadcast, which will feature highlights from the night and classic “Point Break” dead presidents reenactments. Hosted again by the dynamic duo of Sal Masekela and Benji Weatherly, the evening stayed true to its roots of irreverent commentary and soul-stirring highlights from all of the year’s best surf movies and action.

“SURFER Poll is by the people and for the people – which makes it unique,” proclaimed Masekela in his fifth consecutive year greeting the SURFER Poll audience. This sentiment was echoed throughout the night as Poll Award winners accepted their trophies with humble acceptance speeches thanking their fans for voting and their sponsors for supporting. “It’s pretty cool to have the readers of the magazine like what I’m doing,” said Taj Burrow upon claiming sixth-place in the Poll, which awards the top 10 men and top five females honors based on SURFER readers’ voting. 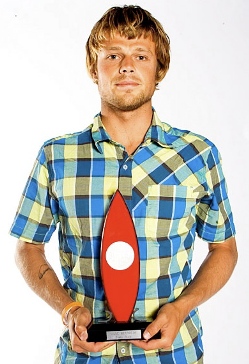 While most of the names in the Poll remained consistent, only shuffling in order, two surfers made their debut. In the women’s Poll, 16-year-old phenom Coco Ho claimed the No. 5 spot and accepted her award modestly stating: “It’s an honor to be standing here with my heroes and friends,” and giving a shout out to best friend, Carissa Moore, who snagged third in the Poll for the second year in a row. In the men’s Poll, ASP World Tour rookie and aerial dynamo, Dane Reynolds, made an impressive first showing in the No. 3 spot. Reynolds also walked with the “Best Maneuver” award for “Dude Cruise.”

A testament to just how impressive Reynolds is, Kelly Slater, upon accepting his monumental 14th Poll focused heavily on giving props to the young up-and-comer.  “Dane Reynolds is the best surfer in the world by far,” said Slater. “Surfing has advanced to where it should be right now and Dane is proof of that. Sitting back and watching surfing today [at the Boost Mobile Pro] made me really proud.”

Completing the event’s “firsts,” Dave Rastovich was presented with the first-ever “Agent of Change” award for the work he is doing with Surfers for Cetaceans. He launched the nonprofit in 2004 to help support the protection and conservation of dolphins, whales, and other marine wildlife, and is truly making a difference among the surfing community and beyond. Surfers for Cetaceans and Surfrider’s “Save Trestles” campaign were the two beneficiaries of this year’s VIP table sales, which raised $16,000 for the two organizations to share.

Check www.surferpoll.com for complete details from the event including images and video.  See highlights on FUEL TV on October 27 in the “Meet & Brotatoes” Monday night special block at 8pm ET/PT. Check www.fuel.tv for additional airdates and times.