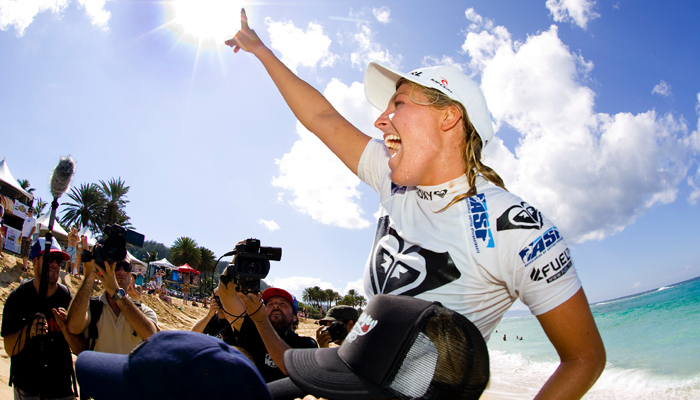 The battle on the big waves at the Roxy Pro Hawaii wrapped up today with Stephanie Gilmore taking home top honors and the 2008 Women's World Title.  In front of a cheering crowd at Sunset Beach, on the North Shore of Oahu, Roxy's four-time world champion Lisa Andersen along with Rabbit Bartholomew from the Association of Surfing Professionals (ASP) presented Stephanie
Gilmore with her two awards.  The finals were held under sunny skies in great 3-5 foot surf in front of a full beach of spectators.

The title was on the line during the final heat at the Roxy Pro Hawaii and it came down to a race between Gilmore and Silvana Lima.  In the last minutes of the competition Gilmore scored an 8.5, to put her in first, 1.67 points ahead of Lima's 14.16.  The four-woman final also included Jessi Miley-Dyer (AUS) and Nicola Atherton (AUS).  Defending event champion and Roxy pro rider Sofia Mulanovich was in the running for the world championship title until Gilmore's victory at Sunset Beach.  If Gilmore lost, she would have had to battle Mulanovich at the Maui event for the 2008 Women's World Title.

"Roxy is proud to crown the 2008 Women's World Champion at this special event," said Randy Hild, EVP of Global Marketing, Roxy.  "As the longest running women's professional competition in Hawaii, it is only fitting that the Roxy Pro Hawaii at Sunset Beach determined the 2008 World Champion.  It was a great week of competition and Sunset lived up to its reputation and delivered great waves for the competitors."

In addition to crowning Stephanie Gilmore as the 2008 Roxy Pro Champion and 2008 Women's World Champion, there was a special awards ceremony with Roxy team rider, Laura Enever being awarded the Noseguard Rookie of the Vans Triple Crown of Surfing. The Roxy Pro Hawaii is the second stop on the Vans Triple Crown of surfing.  For more on the competition and final results please go to www.roxy.com.