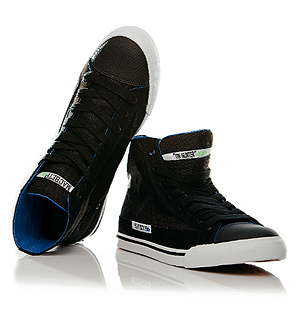 Macbeth Footwear is proud to introduce Hunter Burgan of AFI and Hunter Revenge as our new Vegan Ambassador. As Vegan Ambassador, Burgan will be the official spokesperson of all things vegan at Macbeth. Burgan's dedication to vegan ideals and his friendship with Macbeth have already helped build the Macbeth Vegan program into what it is today. Burgan will be the face and focus of Macbeth's Vegan program, involved in all things vegan related, from hosting a new vegan blog to helping with design, and everything in between.

In addition to Burgan's ambassadorial duties, he and Macbeth are releasing their second vegan Studio Project, a vegan high top called, "The Hunter." Burgan's design goal for his second Studio Project was to create a vegan high top that is the perfect marriage between fashion and function. He needs a shoe that provides ankle support for his active live performances, but also wanted something that reflects his sophisticated design aesthetic.  Burgan's choice of materials, Ballistic Nylon and Synthetic Nubuck textiles for the upper, express his personal style while fiercely contributing to the high top's durability. The shoe will be available globally February 2009.