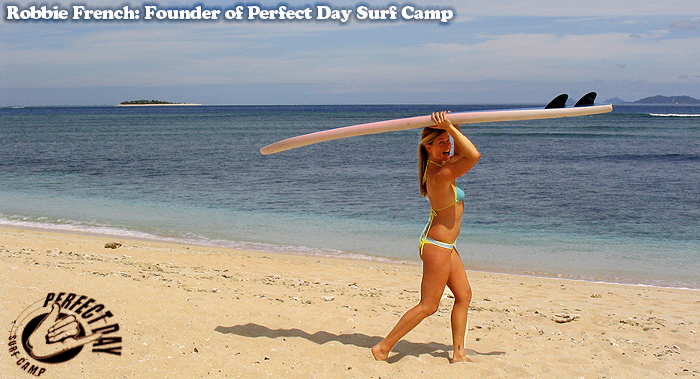 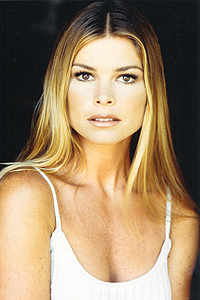 Robbie French, founder of Perfect Day Surf Camp, has an interesting take on the tale of how she arrived at her current home in the industry.  What started as a career in modeling and acting after college, led Robbie to managing popular clubs across the nation, and later to starting her own fashion accessory business, Robbie French Designs.  Little did she know, the knowledge gained through her prior experience in business management would present her with an amazing opportunity to get back in touch with her roots – surfing.

When Quiksilver CEO Bob McKnight presented the idea of starting surf camps in the Los Angeles area, Robbie seized the opportunity and Perfect Day Surf Camp was born.  Robbie’s story is living proof that one shouldn’t take any experience with a grain of salt because it might lay the foundation for career opportunities in the future to come.

How long have you been involved in action sports, inside and outside of the industry?

My dad had a boat, so I grew up skiing and wakeboarding which naturally got me on the mountains as well.  As for surfing, my high school sweetheart was a surfer, so we traveled to Ventura from Bakersfield on the weekends - don’t tell mom and dad!  As soon as I graduated, I headed to Santa Barbara where I eventually moved into my dream home at Rincon, and that is where it all began. 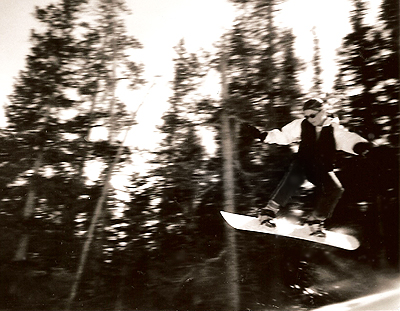 What sparked your interest in surfing?

Boys of course!  No, well maybe, but mostly I am a water girl so I picked it up pretty fast; I was hooked.

After college you pursued a career in modeling and acting, then ended up managing popular clubs across the nation (the Standard in downtown L.A. for example).  How did these past experiences shape the foundation for where you’re at today?

That was my college!  I learned most everything from traveling & managing hotel bars.  When you are dealing with the personality types that frequent the SKYBAR and clubs like that, you can pretty much deal with anyone.  It was a high pressure job with a lot of energy and being taught the business aspect of it was priceless.  Most everything I know today about business was from managing those clubs.  I thrived to be a business person and applied it to my success today.

You are now the founder of Perfect Day Surf Camp; however, this is a far step from your past career endeavors.  Why the change?

After seven years of making someone else a lot of money I was ready to take my entrepreneurial skills and start something of my own.  I had lunch with friend and Quiksilver CEO Bob McKnight and told him that I wanted to get out and do something different.  In 2001, he proposed the idea of me running surf camps in the Los Angeles area that he would sponsor, and I jumped all over it!  That was the best change of my life.  No more rolling in at 3am and getting up late.  My friends find me quite boring now, but I make it up when we do go out and still get the VIP treatment. 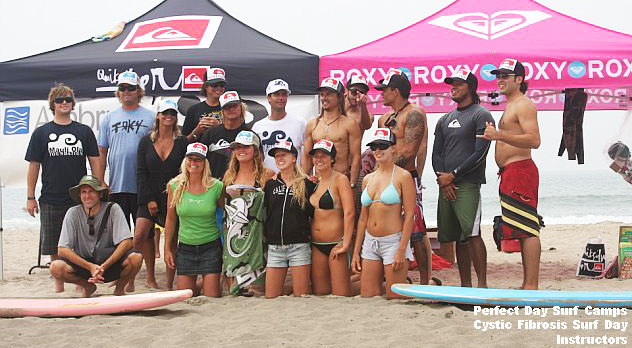 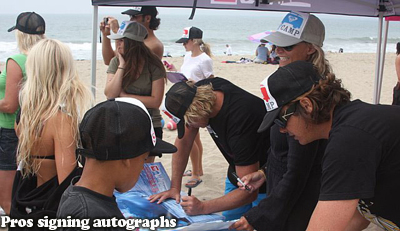 Quiksilver and ROXY have sponsored the camp from the beginning.  Besides donating product and gear, what other roles do they play in helping the organization?

Quiksilver & Roxy help out mostly with their name.  All little girls want to wear Roxy, and boys want the cool Quiksilver trucker hat and t-shirt.  They also help by promoting it on their site, doing email blasts and putting ads in Surfer Magazine.  When I do my charitable events they have pros come out like Strider, Reef and Lisa Anderson to participate with the kids and sign autographs.  If I have any city issues, Quiksilver and Roxy are always there to support me.  They are the best company I have ever worked with.

When starting a surf camp, what goes on behind the scenes that would make someone say, “I had no idea there was so much to it”?

If I tell yah, I’ll have to kill yah!  That’s my secret to a successful and professional business.  But to scare off any potential competition, you need to bid for a proposal for a city permit which entails preparing a budget, marketing plan, and sometimes sitting in front of a panel to pitch why they should choose you - quite nerve racking.  You better be prepared to spend some money because you need to get 1 million dollars worth of liability insurance.  You also have to set up payroll and workers comp, pay for storage monthly, vans to transpo’ and their insurance, a HUGE monthly city fee, live scan and CPR for all your employees, a phone service, website, monthly hosting, major marketing, and the list goes on and on.  Good luck! 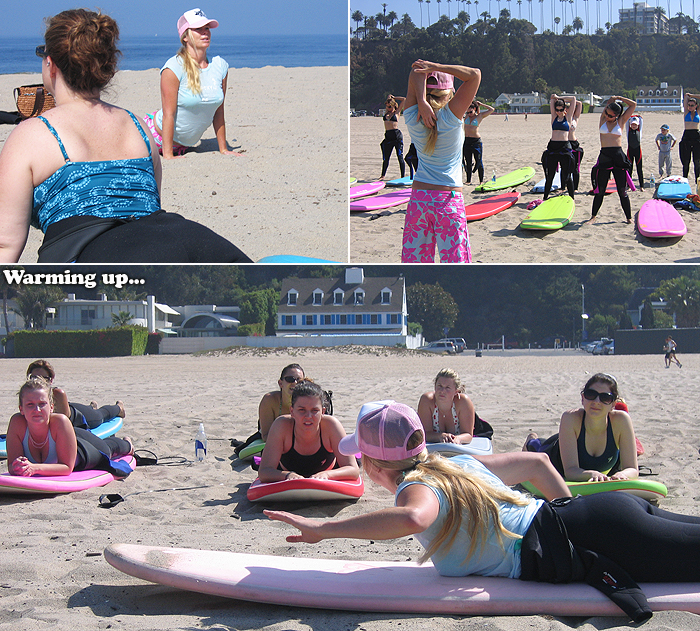 A previous interview said you had a life threatening experience surfing in Indonesia.  What happened in Indo, and how does this experience translate into your teachings at surf camp?

Well, that may have been an exaggeration, but it would have been true if we paddled out into the line up at Padang Padang or Uluwato like we planned.  I was 21 and just learned how to surf, so a girlfriend and I thought we should go on a surf trip to Bali and surf the waves we saw in magazines.  Silly girls!  I did get pretty beat up at Kuta Beach though - haha.

My life threatening experience was in Hawaii.  Pro surfer Alan Sarlo took me out at Sunset on a 2-3’ Hawaii day.  I had never surfed Hawaii before where there were gnarly reefs, and 30 minutes later it became 4-6’ Hawaii size and I was terrified.  I dropped in on a wave, bailed in fear and got held down for what felt like five minutes, came up and there were the following sets.  I never learned about the boils, so that with reef attack put me in a mini panic.  After being pounded from 3 other set waves, I was now pissed and determined, so I paddled back into the line up and ended up stuck for 3 hours!  Sarlo went in thinking I knew what I was doing, I was too scared to take another wave on the head, and I didn’t know how to get back in.  Finally, a local told me where to paddle in. Thanks Sarlo!

Starting these surf camps has allowed you to organize several non-profit surf camp events for handicapped and autistic kids, as well as children with low-income families.  Is running a non-profit your ultimate goal?

I always thought I would have my own non-profit - and someday I might - but it has worked out so well working with different organizations to provide surfing for a variety of disadvantaged individuals.  We taught Joyful Heart Foundations battered women and Stoked Mentoring’s inner-city kids, and now the Mauli Ola Foundation and the Los Angeles Hospital’s children with cystic fibrosis.  They have all been extremely rewarding. Our next big Cystic Fibrosis Surf Day will be this June. 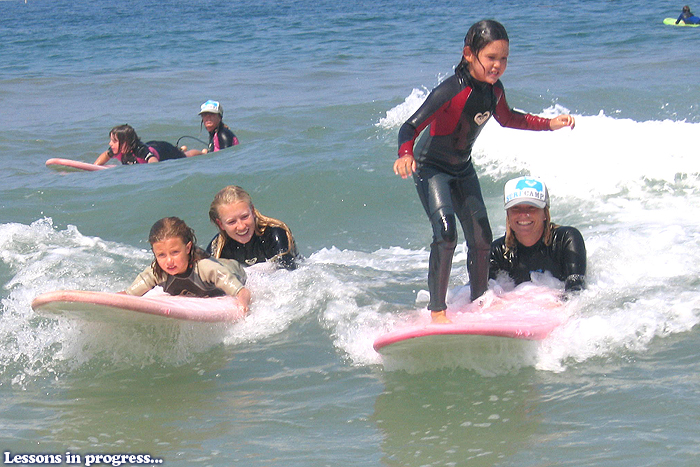 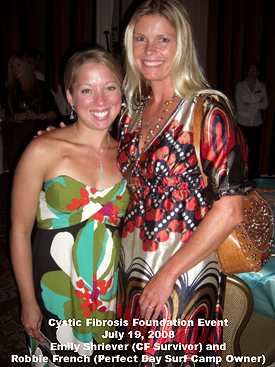 What charities/charity events have you worked on lately?

The CF event mentioned above, and the latest was over the holidays.  I helped organize The Spirit of Goodwill Holiday Party held at Pepperdine for foster & homeless children.  We received over 300 gift donations and we had about 150 kids there.  We had a turkey dinner, and Santa gave out presents and stockings.  There was live entertainment and different stations where the kids could learn arts and crafts, skateboarding, playing guitar and more.  It was awesome!

What is your absolute fondest memory of Perfect Day Surf Camp since opening day?

Besides watching the big smiles from every person that catches their first wave, I would have to say when one of the parents came to me with almost tears in her eyes and said she was always worried that her son would not fit in.  He had a mental disorder, wasn’t social and was not good at team sports.  He took our camp for the summer and was a natural, so I thought it would be cool to give him a responsibility that would make him feel good.  I made him our star and used him as an example to follow.  I had him do all of the demonstrations and it made him feel like he was one of us.  She said he became a different person over that summer.  He was more social, confident and not afraid to try other sports.  She was so thankful.  It was awesome to hear!

You’re also an accomplished belt, jewelry and accessory designer, starting Robbie French Designs back in 2002.  Your belt and accessories business is booming, and you’re looking to launch your first clothing line fall ‘09.  Do you have plans on targeting the action sports industry, or are you going to keep it mainstream?

I am currently in over 700 stores world wide that are contemporary boutiques, so I will utilize those resources for the new collection.  It will be high quality fashionable gear that is affordable.  It will have the look of the popular $350 pant-and-hoodie combo, but will cost half the price.  Check it out soon at www.robbiefrench.com.  I will also be offering merchandise for Perfect Day Surf Camp soon which will be for the action sports industry. 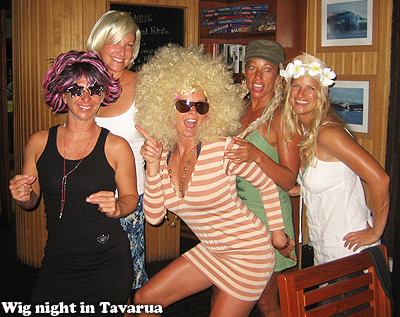 The When Game: Starring You!

Career wise, you know you’ve found your home when...all you obsess about is what you are going to do at work the next day and you wake up excited to jump right into it.

Your job is no longer “just a job” when...you pay your dues then set it up so that you can take off on a surf trip for a month or two without losing money.

It’s a great day on the job when...families hug you good bye.

Fave 5: Which Would You Prefer & Why?

Modeling or acting?
Neither really, but acting because it lasts longer and you can be creative.

High tide or high society?
High society because then I can fly to any tide anytime!

Non-profit or profit?
Ooh, tricky one.  We gotta live!  Non-profit is where my heart is.  It is more rewarding.  So, I would say profit (to start) and make enough to do a reverse tithing to support all the non-profits that help disadvantaged families and children.  In the end it is non-profit.

Entrepreneur route or work your way up the ladder?
What do you think!  Entrepreneur for sure, but it can be sketchy.  The comforts of a pay check do not exist, so the inconsistency can worry you enough to quit, but anyone can do it if they want it bad enough.  I was still working to pay bills my first two years of building my businesses.  You gotta want it bad enough.  Research and attend all expos and events.  Surround yourself around successful people and ask a lot of questions.