El Nino Delivers Snow to Southern California, Past and Present 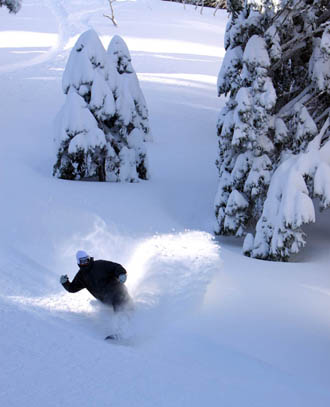 Southern California is on track for a tremendous snow year if recent El Nino reports hold true.  Mountain High’s 12 year average is 141 inches per season, but snow reports show a whopping 278 inches during the last El Nino in 2004/05, and a record breaking 310 inches in 1997/98.  This is great news for skiers and snowboarders as regional resorts haven’t seen more than 150 seasonal inches in the past five years.

Why El Nino delivers increased rainfall to the Southern United States is relatively straight forward.  In normal (non-El Niño) conditions, trade winds blow towards the west across the tropical Pacific. These winds move warm water to the west Pacific while at the same time creating cooler temperatures in South America as cold waters move up from deeper levels. This cold water is nutrient-rich, supporting high levels of primary productivity, diverse marine ecosystems, and major fisheries.  During El Niño however, the trade winds relax in the central and western Pacific, reducing the upwelling of deep sea water and causing a gradual rise in regional surface temperatures.  Rainfall then follows the warm water eastward bringing large amounts of rainfall to areas like the southern United States, Mexico, and Peru.  The exact opposite is true on the other side of the world though, where, in areas like Indonesia and Australia, the decrease in oceanic temperature causes draught.

El Nino is a phenomenon which forces weather changes in regions far removed from the tropical Pacific, but its impact depends on a number of different factors such as the intensity of the oceanic warming, the duration, and the time of year.  In the United States, El Nino typically leads to things such as increased winter precipitation to the Southwest, less wintry weather patterns across the North, and a reduction in the risk of wildfires in Florida.  But it can also cause damaging effects such as severe winter storms, flooding and mudslides.

This year NOAA (National Oceanic And Atmospheric Administration) is calling for a mild to moderate El Nino that will continue throughout the next several months, possibly gaining strength over the winter of 2009/10.  Moderate to strong, Mountain High does very well in these conditions because northern and western storms favor the San Gabriel Mountains.  Their location in relation to the coast means they get hit first with Pacific storms, and the San Gabriel River valley, with Mt. Baldy on one side and Mt. Baden Powel on the other, acts like a catcher’s mitt, grabbing and holding storms as the funnel over the mountains.  It is not uncommon for storms to deplete the bulk of their moisture, dropping several feet of snow on Mountain High before moving on to the San Bernardino Mountains.  The opposite is true of course for “Pineapple Express” storms that originate from the South.

If history is any indicator, this season should be one for the books.  And that means good things for the local economy and the participants themselves.  Skiers and snowboarders won’t have to travel out of state to get their fill of powder stashes and tree runs.  They can explore the local mountains and refamiliarize themselves with all the great terrain they have to offer.  And that means more money for more important things.  Like drinks in the lodge when it’s all done.