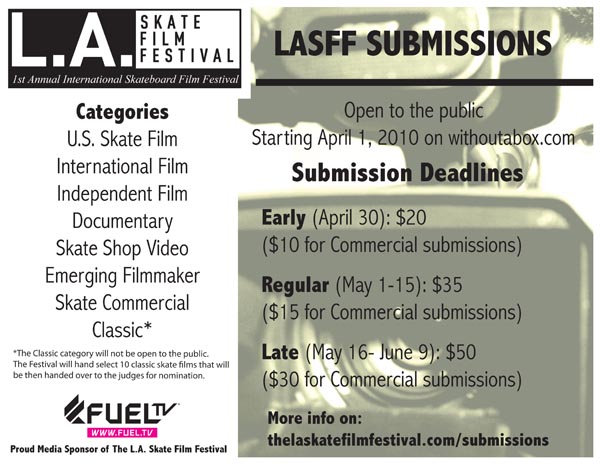 The first annual L.A. Skate Film Festival was created to focus on the filmmakers, directors and artists within Skateboarding, the lifestyle that cultivated the idea of “brand movies” and “lifestyle documentaries.”

For the first time Los Angeles, the birthplace of Skateboarding, will host this International skate film festival dedicated to the best films and the people behind them. The L.A. Skate Film Festival will focus on eight featured categories including: U.S. Film, International Film, Independent Film, Documentary, Skate Shop Video, Emerging Filmmaker, Commercial and Classic.

Behind the scenes awards will also be given out in the categories of Best Photography, Best Editing, Best Soundtrack, Best Intro and Best Skit
Submissions are now open via:

Top nominated films will be publicly screened in Los Angeles on August 31st and September 1st, 2010 at the Downtown Independent Theater followed by an awards ceremony on September 2nd, 2010.

Fuel TV, the “Official TV/Network Partner”, will broadcast highlights of the Festival on the “Daily Habit” and the “Weekly Update.”   For L.A. Skate Film Festival updates and information, please visit the official homepage at http://www.TheLASkateFilmFestival.com.