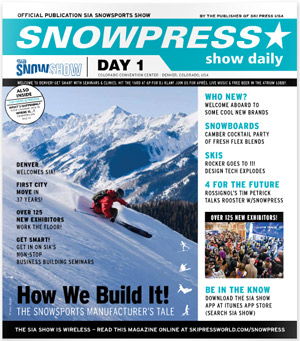 “No other company can match the combination of snow sports experience, relationships, expertise and enthusiasm that AIM and Andy will bring to the Snow Show Daily. We were thrilled to hear their detailed plans to expand the content and reach of the publication and elevate snow sports trade communications in general,” Ingemie said.

Bigford, who served as editor of the Show’s daily publication from 1990-1995, will oversee all aspects of the publication as both editor and publisher. “This is the first step in our plan to take the snow sports dialogue to a higher level and I look forward to discussing ideas with industry leaders as we move forward,” said Bigford. “A pre-Snow Show product preview publication and other initiatives are in the works,” added Bigford. Veteran snow sports journalist Peter Kray, editor of the Snow Show Daily for the past seven years, will work with Bigford to lead the editorial efforts.

Bigford has worked in snow sports publishing for almost 30 years, including his current role as editor and publisher of PEAKS, The Magazine of Vail Resorts. He was editor-in-chief/vice president of SKI Magazine from 1996-2003; general manager of Warren Miller Entertainment in 2003 and 2004; and previously served as editor of the trade magazines Ski Tech and Snow Country Business.