Since the announcement of its debut in the city of Los Angeles back in April, The L.A. Skate Film Festival has been undergoing through a great deal of developments that foresee a bright future for the organization.

ASF’s objectives are to advance and promote the art of filmmaking within the skateboarding industry. Its members will nominate the films and select the judges amongst other creative tasks.

Being that we are 2 Weeks out from the end of the submission process, The L.A. Skate Film Festival is calling all Filmmakers to submit their work before June 9, 2010. So far, this 1st year’s event has been gathering some of the best films from all around the world and wants to dig out the latest gold nuggets out there.

Screenings will be held at the:
Downtown Independent, Downtown Los Angeles
August 31st and September 1st, 2010
7pm-11pm (2 showings, each one presenting 3-4 films)
Only Nominees will be featured.

The Awards Ceremony will be on September 2, 2010 in Hollywood

For the unlucky ones who can’t make it to the event, check out all the action on FUEL TV, a Key sponsor of the LASFF.
The L.A. Skate Film Festival also welcomes its newest partners: Woodward Digital Camp, ASR/Crossroads, Barefoot Wine and Pyramid beer as its official partners, with more to come. 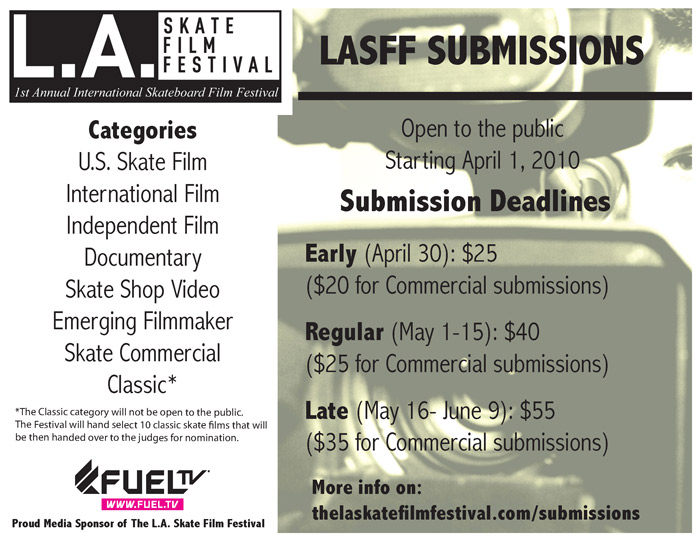