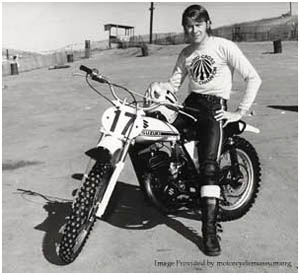 TransWorld Motocross, the leading motocross media outlet in the world, has officially announced this year’s recipient for the Rockstar Energy Drink Lifetime Achievement Award. This award will be given out at the TransWorld Motocross Awards Show on October 7, 2010 at The Grove of Anaheim in Southern California, with host Cameron Steele and co-host Andy Bell.

This year’s recipient is someone whose name is synonymous with the sport of motocross.  The 2010 Rockstar Energy Drink Lifetime Achievement Award honors Roger DeCoster, who first began his professional career in the 60s, medaling in the Belgian National Championships, Trans-AMA series, Motocross World Championships and Grand Prix World Championships, just to name a few.  During his career, DeCoster has been in the forefront of motocross, contributing to the lifestyle of the sport, spanning over nearly four decades.  Following his exceptional racing career, DeCoster has been and still remains a team manager for some of the most noteworthy motocross athletes today.  He was inducted into the Motorsports Hall of Fame of America in 1994 and the AMA Motorcycle Hall of Fame in 1999.

“We are honored to be giving out this award to such an esteemed motocross legend,” said Editor in Chief Donn Maeda.  “It is apparent that Roger DeCoster has devoted his life to the sport of motocross, making him the perfect recipient for this award.”

For more information on the TransWorld Motocross Awards Show and the Rockstar Energy Drink Lifetime Achievement Award, go online to transworldmotocross.com.  This year’s show is presented by Rockstar Energy Drink and includes additional sponsors such as New Era, with their VIP Gold Lounge, Metal Mulisha, and AFMXA.