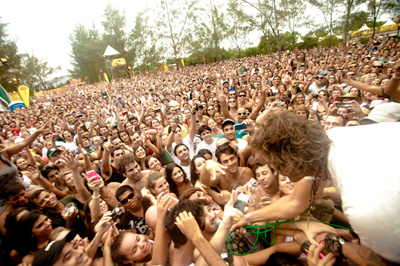 The Summer in Brazil was complete with the 10 Year Anniversary celebration of the Alma Surf Magazine.  From the sea to mountains the county rang in the accomplishments of the largest surf publication in South America.  Alma Surf was created by Romeu Addrinatta with a vision of blending surf culture, the arts and the soul of surfing.  Alma in Portuguese means “soul” and the publication is always working toward the balance of the modern day surfer.

A total of 26,000 people packed the beach side reserve at Santa Catarina that during the day and became a play ground of waves for the musicians in and out of the water.  Skol Beer was able to procure surfboards for many of the band members to surf.  But Tom Curren found a willing local surfer to lend him his board and off went the surfing champion in the waves of Florinopolis along with Romeu Andreata, Alma Surf Magazine’s Publisher on a standup paddle board.  Franknreiter showed his wave skills to the thrilled on lookers that day with many tube rides as well!

One of the highlights at the concert was a duet with Ben Harper and the beautiful Brazilian singer/songwriter Vanessa da Mata, in the song Luck/Good Luck that Vanessa first wrote and record in 2007.  Once Harper heard the tune he sang it as part of his set and when he first came to Brazil a few years ago they met and sang the song together.  It was magical moments like this that made the Skol Beach Music, an event that was one of the best of global surf concerts taking place on the beach of Campeche in Florianopolis. 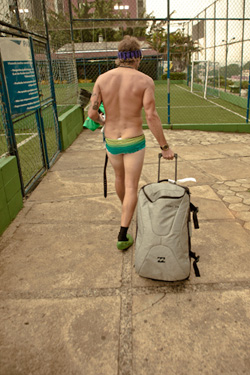 Donavon a big crowd favorite felt the excited vibes of the audience and came out to the crowd and sang “If It Don’t Matter To You” with a rousing audience participation.  He later returned to the stage and sang “Diamonds On The Inside” with Harper.  Tom Curren had total respect from the crowd with his solo performance with Franknreiter coming out and accompanied him on drums for a song.

Besides the public Good who followed the shows in Campeche, on Saturday in a live broadcast over the Internet, 22,000 other Web surfers from Santa Catarina gave a presentation on the site of Skol.  Over all an estimated 47,000 people attended the series of concerts celebrating the 10 Year Anniversary of Alma Surf Magazine.  In the past Alma has hosted for their Festivals a number of surfing's notables such as; Art Brewer, Greg Noll, PT, Rick Irons, Rob Machado, Andy Irons, G Love, ALO, Matt Costa, Jake Shimabukuro, Pat Rawson, Clark Little, Sean Davey, and artists Jay Alders and Celine Chat.  Congratulations to Alma Surf Magazine many there be many more celebrations to come!