Arnette is proud to announce it has added six of today’s most exciting US and European snowboarders to its National Team including Nick Visconti, Johnny Lazz, Niko Cioffi, Tim Eddy, Alek Ostreng and Alex Tank. 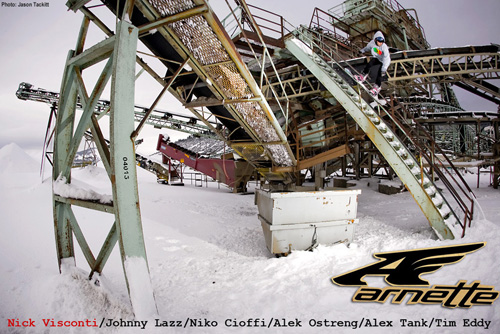 "There are a number of eyewear companies out there, and they all make a product that gives snowboarders the protection they need to shred another day,” says Nick Visconti.  “Unfortunately, many brands only give riders a product.  Arnette, on the other hand, offers so much more; it is the epitome of a lifestyle movement supported by passionate individuals who want to invest themselves in a vision for life, not just a simple product.”

“We feel our global squad is one of the most influential in snowboarding, and by adding such a diverse and talented group of national riders to the mix, it makes our team even stronger and more exciting,” says Arnette Team and Events Manager Brent Bearden.  “We have big things planned for next year, and we’re really psyched to have such an amazing group of guys backing our new goggle program.”

Tahoe’s own Nick Visconti is a cerebral snowboarder who creatively explores shredding through filming for Think Thank and producing online media segments for “Tahoe Dangerzone,” a video blog that documents his on-hill antics and experiments.  Nick has a larger-than-life personality and unique style, and he is a dedicated skateboarder.  When not holding it down in Tahoe, he can be found lurking in Venice Beach with the Arbor crew.

North Lake Tahoe’s Johnny Lazz is one of the funniest dudes you will ever meet.  He is loud, super talkative and doesn’t give a f%#k what other people think.  An all-terrain dominator who can slay backcountry lines and handrails equally well, Johnny loves to bend the rules and has been known to outrun ski patrol on more than one occasion.

A proud Vermonter with deep Killington roots, Niko Cioffi has a scrappy swagger and style all his own.  He is a founding member of Rutland’s GBP crew, and over the past few years he has spent winters in Truckee riding and filming with the Forum team.  With several impressive video parts already to his credit and a deep bag of tech tricks on lock, the future looks bright for this versatile Green Mountain shredder.

Tim Eddy is an Alpine Meadows local and total ripper.  When the flakes are flying he spends his days in the backcountry dropping cliffs and carving out ridiculous lines.  When summer rolls around he packs his bags and heads to High Cascade to keep the good times rollin’.  A self-proclaimed foodie with a sweet tooth, Tim’s mellow demeanor and positive attitude make him an awesome guy to hang out with.

Norwegian powerhouse Alek Ostreng charged onto the scene a few years back and has been making noise ever since.  A dedicated member of the Youngblood squad, Alek is a top competitor on the Winter Dew Tour and has been hard at work this season filming for the new Forum team video.  Whether big air or slopestyle, Alek is always smooth as butter and can throw down with the best of ‘em.

Alex Tank is a Euro jibbing machine with a super clean style who kills parks and rails like nobody’s business.  Arguably the best thing to come out of Germany since Heidi Klum and Oktoberfest, Alex rides with the Eye of the Tiger and absolutely destroys it every time he straps on his board.

Be on the lookout for Arnette’s snow team at a mountain near you as they will all be wearing the new Mercenary and Series 3 goggles, which are slated to hit shops Fall 2011.