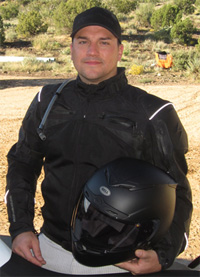 "We are very excited to have Jon on our team," says Bell's Business Unit Manager Chris Sackett. "Jon's extensive sales background combined with his brand building expertise is exactly what we were looking for at Bell Powersports." Eide's experience, combined with his passion for the industry made him the ideal candidate to elevate Bell's dealer development efforts.

"Jon has a wealth of knowledge in building a strong independent sales rep force calling on dealers across the country," adds Bell's National Sales Manager, Matt Schumann. "We plan to tap into that knowledge to help expand our sales force and better reach the dealers with a targeted and cohesive brand experience," says Schumann.

"The history of the Bell brand runs deep and is rich with racing heritage," exclaims Eide. "I am honored to be a part of the Bell family. Their commitment to innovation and quality is second to none!" Having helped build one of the fastest growing brands of motorcycle helmets and apparel in the industry, Eide was always well aware of Bell's heritage as the helmet industry leader since the brand was founded by racing fanatic and safety advocate Roy Richter back in 1954.

Although he hasn't been around quite as long as the Bell brand, Eide has earned his stripes in the powersports industry. An avid off-roader and emerging roadracer, he worked on the dealership level for several years before he made the move from Eugene, Oregon to SoCal in 2004 to go to work as one of Scorpion Sports' first employees. He started as an inside salesperson and quickly worked his way up through the ranks to become West Coast Regional Manager in 2005 and then National Sales Manager in 2010.

"I love working in this industry," concludes Eide. "You will not find a more passionate group of people anywhere!"