The Surfrider Foundation Oahu Chapter will host a cleanup on the North Shore at Sunset Beach Park on Saturday, Dec. 10, 2011, from 10 am to noon. Surfrider is partnering with global youth lifestyle brand Airwalk, pro surfer, model and Airwalk athlete Anastasia Ashley, and San Lorenzo Bikini to remove trash from Sunset Beach to Pipeline.  Airwalk will be donating sneakers, limited edition 25th Anniversary flip flops and backpacks to the initial volunteers at the cleanup.  Airwalk will be co-sponsoring lunch with San Lorenzo, who will be giving away some of its bikinis at the event.  Volunteers are encouraged to bring sunscreen, reusable water bottles, gloves and recycled plastic bags to pick up trash. 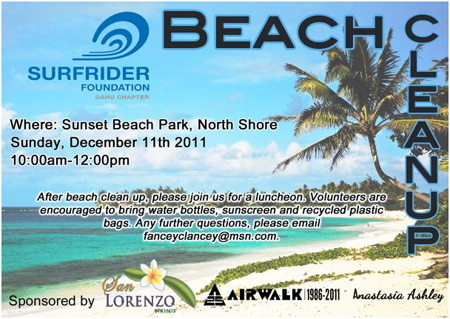 As part of its Rise Above Plastics (RAP) campaign, Surfrider is working to reduce the proliferation of single-use plastic bags and water bottles, as well as the number one littered item worldwide—cigarette butts.  The RAP campaign seeks to educate people about the prevalence of plastic marine debris on our beaches and oceans (www.riseaboveplastics.org). Surfrider hosts monthly cleanups with sponsors like Airwalk & San Lorenzo to keep our beaches clean and educate the public about ocean-related issues.

San Lorenzo Bikinis combines South American flare and the perfect mix of Hawaii's Aloha Spirit: Bikinis, Clothing & Accessories. With hundreds of high-end bikinis made in Brazil and Peru, customers have the option to mix and match, and purchase separates from over 20 different styles. With nine store locations throughout the Hawaiian Islands, San Lorenzo offers a wide variety of swimwear to meet any girl’s needs. For more info, go to: www.sanlorenzobikinis.com.

Celebrating its 25th anniversary, Airwalk has broken new ground within youth board sports culture and youth lifestyle.  Originating in Southern California in 1986, Airwalk began as a brand by skaters and for skaters. Since then, Airwalk has branched out into multiple board sports disciplines and also into lifestyle apparel and footwear. Airwalk team athlete Anastasia Ashley grew up in Hawaii, is a professional surfer and successful model.  By the age of 18 she was named the Association of Surfing Professionals Hawaiian Triple Crown Rookie of the Year and was a finalist at the 2009 Women's Pipeline Pro.

Founded in 1984, the Surfrider Foundation is dedicated to the protection and preservation of our world’s oceans, waves and beaches through a powerful activist network.  Surfrider has over 81 chapters and 250,000 supporters, activists and members across the United States. The Oahu Chapter is in its 15th year of activism and has been working on issues of beach access, water quality, coastal preservation and plastic marine debris.  For more information, go to www.surfrider.org/oahu.