The International Surfing Association, the World Governing Authority for Surfing recognized by the International Olympic Committee, is proud to announce that DaKine has signed a sponsorship agreement for the ISA World Junior Surfing Championship.

The traditional Hawaiian accessories company, originally from Haiku, Maui, committed for two years as the title sponsor of the largest competition in the world for surfers under-18 years old. 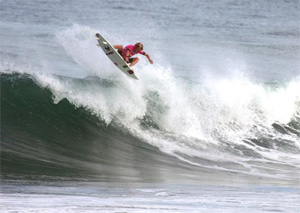 The 2012 DaKine ISA World Junior Surfing Championship will be presented by Billabong, DaKine's parent company, and will be held at Playa Venao, Panama from April 14 to 22. It will be the 10th edition of the most prestigious international team event for junior surfers.

"This is great news to celebrate the tenth anniversary of the ISA Juniors," said ISA President, Fernando Aguerre. "We began the under-18 World Championship when we anticipated a growth trend in youth surfing globally. Today, this event gathers 300 surfers from 30 countries on a yearly basis, and to share such a beautiful experience with a grassroots surfing brand, DaKine, is great for everyone. I am looking forward to the 2012 edition of the event in surf-rich Panama."

Billabong USA President Paul Naude commented: "DaKine is a hard core surf accessory brand focused on developing products that help to improve a surfer's performance. It's a natural fit for DaKine to support the ISA World Juniors where the highest level of performance is being judged on every ride during the competition."

The ISA World Junior Surfing Championship started in 2003 in Durban, South Africa with a little over 100 athletes from 11 nations. Two years later in Huntington Beach, California, the event had 250 entries and 29 countries participating. Today it is the largest junior surfing event in the world.

Australia has won six Team Gold Medals, while Hawaii, Brazil and Peru have won one event each.

The 2012 DaKine World Junior Surfing Championship Presented by Billabong will see the best surfers competing for the gold in the Boys Under-18, Boys-Under 16 and Girls Under-18 divisions. Surfers will compete for individual and team medals.