POWDER, The Skier's Magazine, is proud to announce the promotion of John Stifter to Editor, replacing longtime staffer Derek Taylor. Publisher Ashley Otte announced that Stifter will be directing all editorial properties for POWDER, including print, digital and events. 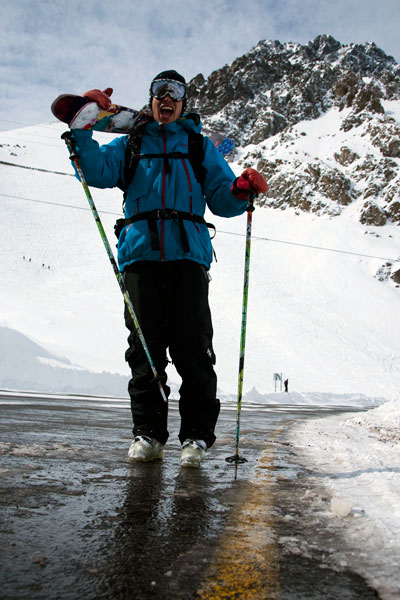 Stifter grew up skiing Schweitzer Mountain Resort in Northern Idaho, where his love for all things Pacific Northwest originated. After an internship with POWDER eight years ago, Stifter, an English and History graduate of Montana State University, became the Associate Editor from 2007-2010. Last year, he held the Senior Editor post and now joins the likes of Neil Stebbins, Casey Sheahan, and Steve Casimiro as the 12th Editor in the 40-year history of the magazine.

"Johnny has a passion for skiing, and life, that is simply part of his DNA," said Otte."With more than four years spent on staff and several more freelancing for ESPN and other media outlets, his professional skills are well beyond his years. After celebrating our 40th anniversary this season, Stifter is definitely the Editor who can continue the legacy of POWDER for years to come."

"I've dreamt of this honor since I was a little kid devouring the Intros and Shooting Gallery," says Stifter from POWDER's San Clemente office. "It's such an exciting time in media and at POWDER, as we're keen to continue to innovate after the 40th anniversary volume with a fresh, young staff. As an editor and skier, I'm so grateful to be a part of this tribe."

The move also signals a shift in the rest of the editorial staff, including the promotion of Mike Rogge to Managing Editor. Rogge has been the Associate Editor the last two years.

"Rogge possesses such a positive energy for all things skiing that's infectious to the staff and skiers the world over," says Stifter. "I'm eager to edit alongside him and continue the proud tradition of quality storytelling while evolving the title in a multimedia world."

Taylor has moved on as Editor after five years at the position, and a decade as a staffer at the magazine. He has relocated to Ogden, Utah, to raise a family. Taylor will continue to work as an independent contractor for GrindMedia, the integrated sports media group that publishes POWDER, and will continue to contribute to the magazine in addition to leading some new initiatives for the Grind group.

"I'm humbled to have had the opportunity to be a steward of POWDER Magazine, and to be a part of this family," says Taylor. "I'm very fortunate in the people I now get to call my friends and colleagues, and have loved leading this title over the last five years. But after 10 years on staff, I'm also looking forward to the next phase of my life, the first step of which is getting back to the mountains."

About POWDER
For 40 years, POWDER, The Skier's Magazine, has been produced by and for those who embrace skiing, and is developed through a collective love of two things: good skiing and good magazines. Since it's inception in 1972, the strength of the POWDER title has been based on authenticity, experience, and respect for its readers-the most passionate, dedicated, and loyal in the sport. POWDER is part of Source Interlink Media's Grind Media that reaches more than 10 million active sports enthusiasts through an integrated network of magazines, online properties, events and television programming. For more information, please visit www.powder.com.