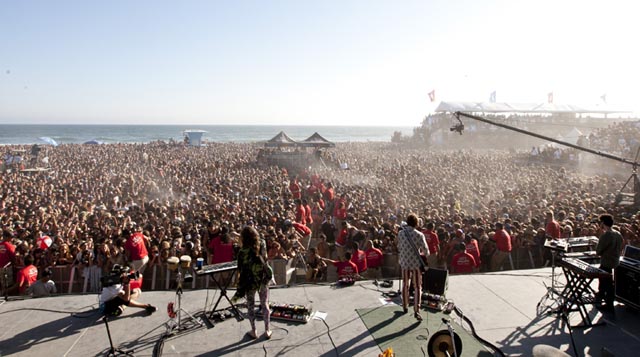 TV On The Radio, Grouplove, Best Coast, Toro Y Moi, White Arrows, Hindu Pirates And Walk The Moon All Join The Line Up For The Biggest And Best Free Concert Of The Summer

The 2012 Nike US Open of Surfing will spill over from the ocean to the sand when bands like TV on the Radio, Grouplove and Best Coast take over the Music Stage with three nights of music in front of hundreds of thousands of fans with each night being presented by a different brand: Nike, Hurley, and Converse respectively. The music stage has become one of the most anticipated programs during the Open and has grown to be the largest free concert series of the summer.

“Every year the crowd looks forward to our music series,” says James Leitz, Senior Vice President of IMG. “And every year Nike, Hurley and Converse bring the best bands to the beach during the US Open of Surfing. Music, sport, beach. What more can fans ask for?”

This year’s musical line-up melds the laid back surf-vibe of rockers Best Coast with the post-punk electronic rock sound of TV on the Radio and the alternative stylings of Grouplove. The series will also include sets by emerging artists White Arrows and Hindu Pirates.

“For years my brother and I have been going to the US Open to watch the competition, so to perform and hang with the best surfers in the world is such an honor for me,” said Grouplove’s Andrew Wessen.

Known as the world’s largest youth culture and action sports festival, the Nike US Open of Surfing will feature daily concerts Wednesday through Friday, August 1-3, at the conclusion of the surfing competition. All concerts are free and open to the public.