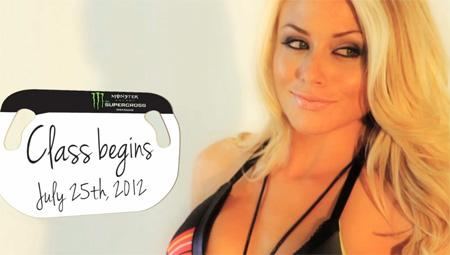 “It means the world to me to have the opportunity to once again serve as Miss Supercross, and I want to thank Feld Motor Sports for bringing me back for the third year,” said Dahlgren. “The last two Monster Energy Supercross seasons have been amazing, and heading into 2013, it appears that we may see the sport’s deepest field of completion ever.”

In addition to her responsibilities as Miss Supercross, she has enjoyed success on the IFBB circuit as a Pro Bikini Competitor. As a multi-time competition winner, she finished third in the Olympia, which is the sport’s most prestigious event, featuring an international line up of competitors.

Beginning Wednesday, July 25, at Noon CT, the first of 10 webisodes, titled SX Ed, featuring Miss Supercross will be released. To view the trailer, click below.

*Not a Feld Motor Sports Race