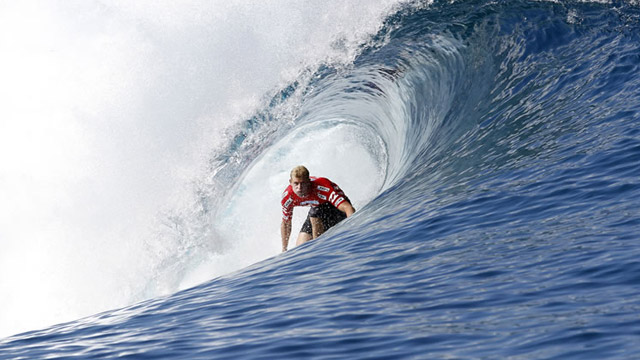 Mick Fanning (AUS), 31, two-time ASP World Champion and current ASP WCT No. 1, will be back with a vengeance at the 2012 Billabong Pro Tahiti. Image Credit: © ASP/ SCHOLTZ

The world’s best surfers are converging on the planet’s heaviest lefthander next week for Stop No. 5 of 10 on the 2012 ASP World Championship Tour, the Billabong Pro Tahiti, to be held from August 16 – 27, 2012 at the infamous South Pacific reef pass of Teahupo’o.

Following last year’s historic installment of the event, ultimately won by reigning 11-time ASP World Champion Kelly Slater (USA), 40, and featuring a barrier-breaking tow-in session dubbed ‘Code Red’, the surfing world eagerly anticipates the return of this season’s Billabong Pro Tahiti and the impact it will have on the 2012 ASP World Title race.

Mick Fanning (AUS), 31, two-time ASP World Champion (2007, 2009) and current No. 1 on the ASP World Championship Tour ratings, is no stranger to leading this elite group of surfers, but is guarded about holding the frontrunner spot at this point in the season.

“The advantage is knowing that I’m in the race and I’m collecting the kind of results that could count toward a title,” Fanning said. I’ve had pretty average starts to the past few seasons and managed to finish pretty well so it feels good to have some early momentum for a change. Being at No. 1 at this stage though means very little, it’s a long year and there’s nothing separating me and the rest of the guys in the Top 10. I don’t get too worried about who is chasing, I just try and collect big results at every stop.”

Although an event runner-up in the past (2007), Fanning has been unable to crack the Quarterfinals in recent years – an issue he hopes to remedy this season.

“Tahiti’s a tricky venue to do well even for the very best guys,” Fanning said. “I’d expect the Hobgood brothers to be in the Final out there every year but it doesn’t work like that. At a venue where one big barrel can turn a heat, there’s always going to be upsets. So the biggest challenge is making sure you’re on the best waves in the heat and you get yourself nice and deep in that barrel.”

One of the more specialized waves on the planet, Teahupo’o boasts a heavy field of local and international experts that will compete for two event wildcards. These wildcards will, in turn, draw top seeds like Fanning.

“The Tahitian wildcards and trialists at Teahupo’o have done some real damage in the past,” Fanning said. “The locals are obviously psyched to see the Tahitians do well and they get out there in their boats and give them an incredible amount of support. Then there’s the specialists – guys that generally spend a fair bit of time at Chopes. They’re there a week before the trials and have already surfed a few heats out there before you come up against them, so they are completely in the zone and ready to go.”

Surfline, official forecasters for the Billabong Pro Tahiti, are calling for a low rise in small/short-period SE swell from Sunday, 12th, into next Tuesday, as small WSW swell joins in for waist-shoulder high waves, some plus sets. Similar size SSW swell shows mid week while the WSW drops out. Better, longer-period SW swell and possible WSW swell from current Tasman Sea storm scheduled to move in Thursday, 16th, and peak Friday with chest-head high surf and inconsistent overhead sets. Those waves fade over the following weekend. More onshore flow is expected for the south facing breaks into the start of next week, then SE tending ESE winds on tap for the second half of the week.