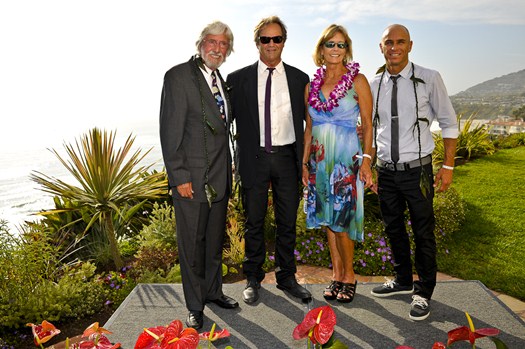 ALISO VIEJO, Calif. (August 13, 2012) — More than 675 professional surfers and surf industry VIPs joined together to support the preservation of the ocean at the SIMA Environmental Fund Waterman’s Weekend fundraiser on August 10 - 11.  The 12th Annual Waterman’s Classic Golf Tournament took place at the Monarch Beach Golf Links in Dana Point on August 10, and the 23rd Annual Waterman’s Ball took place at the Ritz-Carlton, Laguna Niguel on August 11.  Waterman’s Weekend fundraising efforts exceeded the event goal of $400,000 for protecting oceans and surf breaks locally in Orange County and around the world. To date, Waterman’s Weekend has raised more than $6.2 million over the past 23 years for the SIMA Environmental Fund beneficiaries.

“Waterman’s Weekend allows SIMA to give back by helping protect the very thing that keeps us in business and keeps us doing what we love,” said Paul Naude, SIMA Environmental Fund President and Billabong’s President of the Americas. “This is a special year for the Waterman’s Ball, as this year we surpassed the $6 million mark which we have contributed to our beneficiaries over the years. Thank you to all of the beneficiary organizations that we support for all the hard work they do and for keeping us in the water. This year we are extremely honored to pay tribute to Shane Dorian, Jean-Michel Cousteau and the much loved, late Sean Collins as they are members of our tribe who have helped change the face of our sport, industry and ocean environment.”

“I was given the gift of loving the ocean at a very young age and I am very grateful for that,” said Dorian. “I just want to say how proud I am to be a part of the surfing industry. The surfing world has grown quite a bit during my time, but to me it still feels like a really tight-knit, grassroots family. I am very proud of the surf industry and SIMA for all the steps that they have taken to raise a lot of money to support different water-based charities that are doing a lot of great things to protect what we love. We love the ocean and we love to surf. It’s important and we need to take care of it. ”

Also celebrated during the evening was Naude with a special recognition award for his 12 years of service as the SIMA Environmental Fund Board President and as the President of the Waterman’s Weekend Planning Committee. Naude has selflessly dedicated himself to Waterman’s Weekend, the environment and protecting the ocean, beaches and waves. The award was a surprise to both Naude and attendees.

“If it weren’t for the dedication of Paul Naude for the past 12 years of helping to put on this event and providing the leadership to do this, there’s no way the surf industry would be at the point where we could say we have raised more than $6 million to save the ocean,” said Sean Smith, SIMA Executive Director, while presenting Naude’s award.

Along with the award presentations, the live auction was a highlight of the Waterman’s Ball. Audi donated the 2013 Audi allroad® Featuring quattro® All-wheel Drive boasting a premium plus package and bidding for the car finally settled at $46,000.  The House of Blues Anaheim donated a private party for 500 people and doubled up the package, selling each for $25,000. The Switchfoot package sold five times for $20,000 each and included a special surfer guest appearance in their new film, Fading West, as well as a private film screening, all-access concert passes and a recording studio visit. Other auction items included a dream trip for two to the exclusive Ninamu Resport in the French Polynesia with the once-in-a-lifetime opportunity to dive with Cousteau, a commissioned portrait by The Faces of Surfing artist Letty Nowak, and a replica of Dorian’s Jaws 2011 award winning big wave board shaped by John Carper and a framed photo of Dorian riding the 57’ wave.

Shane Dorian, Waterman of the Year

“There’s been no one who has influenced me as much as Shane and pushed me on so many different levels and inspired me,” said Slater as he presented Dorian’s award.

Waterman of the Year, Shane Dorian, is known as one of the most influential names in big-wave riding today. To see Dorian push over the ledge at Waimea, fearlessly haul into massive waves at Pipe or sky-dive into the maelstrom at Teahupoo is to see the kind of commitment, spirit and surfing that takes one’s breath away. Since turning up on the surf media map in the late ‘80s, he has won a Hawaiian state title, pushed the paddle-in limits on the North Shore’s outer reefs, redefined deep tuberiding at spots like Backdoor, helped spearhead the “New School” of surfing, contended for a world title, towed in at spots like Jaws and continues to be on the frontier of cutting-edge, high-performance surfing. As not only a wave slayer who fears nothing, Dorian also gives back to the Hawaiian community annually during the Shane Dorian Keiki Classic, which spreads the love of surfing for free to Hawaiian youth and collects food for charity.

Jean-Michel Cousteau, Environmentalist of the Year

“I’ve always believed real change comes from the heart,” said Cousteau. “To make real change, you must appeal to the heart.  That’s what I have always tried to do through my films and educational programs – inspire curiosity and a sense of responsibility through the heart.”

For more than four decades, Environmentalist of the Year Jean-Michel Cousteau has dedicated himself to communicate to all nations and generations his love and concern for our water planet. Since first being thrown overboard by his father at the age of seven, he has been exploring the ocean realm. The son of ocean explorer Jacques Cousteau, Jean-Michel has investigated the world’s oceans for much of his life. Honoring his heritage, Jean-Michel founded the Ocean Futures Society in 1999 to carry on pioneering work. Ocean Futures Society, a non-profit marine conservation and education organization, serves as a “Voice for the Ocean” by communicating wise environmental policy. As Ocean Future’s spokesman, Jean-Michel serves as a diplomat, reaching out through a variety of media. He has produced more than 80 films, received the Emmy, the Peabody Award, the Sept d’Or, and the Cable Ace Award. As one of the world’s leading ocean activists, it is a privilege to honor Jean-Michel with the Environmentalist of the Year award.

“Sean was a pretty typical surfer in that he loved to score great waves and he wanted you to score great waves too,” said Tyler Collins. “He knew that you would be stoked if you did and I don’t know where he got the motivation to do it, but he dedicated his life to making sure that was possible. And I think that is pretty special because any guy who dedicates his life work to making sure that other surfers can stay stoked, that’s a pretty tall order and I don’t think you can ask much more from a guy. It’s an honor that he is being recognized for such an award and thank you again from the bottom of our hearts, from our family, for Sean, thank you for this award and for continuing to work towards developing the sport of surfing in this incredible industry. ”

As an avid surfer and entrepreneur whose self-taught ability to forecast ocean swells changed the way surfers worldwide chase the perfect wave, the late Sean Collins’ life is the definition of what it means to be a Lifetime Achievement Award recipient. As the President, Chief Surf Forecaster and Founder of Surfline.com, a website featuring free surf reports from around the world, Collins developed a sophisticated, proprietary system of wave forecasting, which is currently used in LOLA, Surfline’s Global Swell Model. Through Surfline, Collins provided weather and forecasting services to every lifeguard agency in California, the Coast Guard, U.S. Navy Seals, National Weather Service, numerous television and movie production companies, multiple domestic and international government agencies and nearly every surf company in the world. Collins also directed an exclusive crew of big wave riders to chase the largest waves on Earth at any moment – including Mike Parsons, Brad Gerlach, this year’s Waterman of the Year Shane Dorian, Laird Hamilton, Greg and Rusty Long, Jamie Sterling and more. Collins was named one of the “25 Most Influential Surfers of the Century” by Surfer Magazine, the “8th Most Powerful Surfer in the Surf Industry” by Surfer Magazine and one of the top 100 People who wield the most power and influence in Southern California by the Los Angeles Times WEST Magazine. A pioneer in the surf industry whose time was cut too short, Collins’ impact lives on through his work and continues to inspire surfers every day.

Photos from the event are available for media. For media inquires please contact SIMA Communications Manger, Mandy Lausché at Mandy@sima.com or 949.366.1164 x7.

The Surf Industry Manufacturers Association (SIMA) is the official working trade association of more than 300 surf industry suppliers. Founded in 1989, SIMA is a non-profit organization that serves to promote awareness of the surf industry and participation in the sport of surfing through public relations efforts and a variety of services, educational programs and research. In addition, SIMA actively supports oceanic environmental efforts through its 501(c)(3) charitable environmental foundation, the SIMA Environmental Fund. In the past 23 years, SIMA's Environmental Fund has raised more than $6.2 million for environmental groups seeking to protect the world's oceans, beaches and waves. The SIMA Humanitarian Fund, also a 501(c)(3) charitable foundation, was established in 2006 to award grants to various surf or boardsport related social and humanitarian non-profit organizations whose efforts are focused on improving the quality of life, health and/or welfare of people.