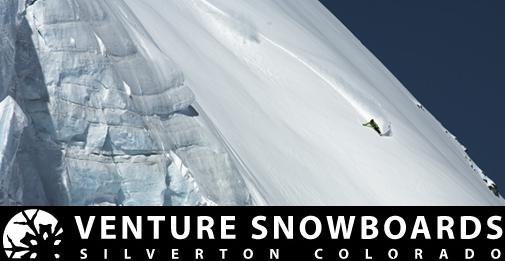 Venture Snowboards today announced the addition of Jerome Boulay to the company's management team in the role of Sales Manager. As Sales Manager, Boulay will be charged with overseeing all aspects of Venture's sales program, both domestically and abroad. He will also play a key role in helping shape the company's marketing and design efforts.

"We are thrilled to have Jerome on board. With his passion for the backcountry and firsthand knowledge of splitboarding he's a perfect ambassador for our company," said Lisa Branner, co-owner at Venture. "Up until now we haven't had a staff member dedicated entirely to the sales process, so this is a big step. Given Jerome's track record in the industry, I have no doubt he will take things to the next level and provide an amazing customer service experience for our retailers."

Originally from Paris, France, Boulay moved to Aspen, CO in 1992 and since 2007 has been splitting his time between Crested Butte, CO and Northern Patagonia. Since his arrival in the U.S., he has immersed himself in the snowsports industry, handling snowboard sales, marketing and distribution for Nidecker Snowboards from 1997 - 2005, and in recent years working with Global Sales Guys to grow companies like Deeluxe Boots, Icelantic Skis, and Level Gloves.

An avid powdersurfer, Boulay is excited to join the Venture family.

"Being able to work from Silverton to focus on high performance boards, splitboards and powdersurfing decks is simply awesome!" He also cites the company's grassroots approach as part of the attraction. "I am very impressed by the way the Branners have built Venture over the past 12 years, true to their commitment to snowboarding, environmentally conscious U.S. manufacturing, controlled growth, and innovative designs every season."

Boulay recently spent three seasons as a buyer at Crested Butte's Colorado Boarder, an experience that gives him unique insight into the world of retailers. "I look forward to seeing you all in your stores this fall to continue to build the Venture brand together, as partners."

Founded in 1999 by the husband and wife team of Klemens and Lisa Branner, Venture handcrafts premium quality freeride boards and splitboards from scratch in Silverton, CO using sustainably harvested woods and wind power.