EVENT: "Hurley Rocks You Back To School" Concert Series Comes To Orange County 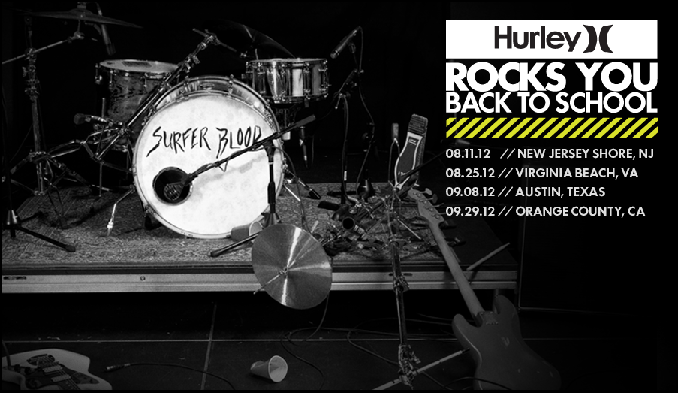 COSTA MESA, CA – Hurley’s last stop in their 2012 “Hurley Rocks You Back to School” series, will land in Orange County on September 29th. “Hurley Rocks You Back to School” is a series of “secret” late-night concerts featuring indie-rock band Surfer Blood. Surfer Blood premiered their first album, “Astro Coast,” in 2010 with Bob Boilen from NPR declaring that it might have been his “…favorite album of 2010.”

This year’s concert series began on August 11th in Asbury Park, New Jersey before traveling to Virginia Beach, VA on August 25th, and then Austin, TX September 8th before ending in Orange County, CA. Opening for Surfer Blood on September 29th will be Orange County’s own, Hindu Pirates and the Honey Badgers.

The series is hosted by Fuel TV’s Mike “Rooftop” Escamilla and Hurley’s own Rosie O’Laskey. Tickets are available through participating retailers now through August 11th. Customers who make a $50 purchase will receive 2 wristbands for the show featuring only the date, time and a special “Hurley Rocks You Back To School” RSVP URL (Hurley.com/RocksYouBackToSchool). Once logged in and RSVP’d, consumers will then receive information regarding the event venue and additional details.

Hurley will also give away a select number of VIP access wristbands through local media as well as social media channels for Hurley and Surfer Blood. Lucky winners of VIP tickets will allow attendees a chance to meet-and-greet with the band and attend their private sound check. Limited-edition “Hurley Rocks You Back to School” merchandise will also be sold at each of the events.

“Hurley Rocks You Back to School” Concert Calendar:

About Surfer Blood
West Palm Beach four-piece Surfer Blood released their breakout debut Astro Coast in 2010. The album and its songs landed atop numerous Best Of Lists, including Rolling Stone, Pitchfork and Filter, with Bob Boilen from NPR declaring “…dig into Astro Coast and you'll hear why, song for song, this may be my favorite album of 2010.” They have toured extensively in the US and abroad, sharing the stage with the Pixies, …Trail of Dead, Death Cab For Cutie and more. Surfer Blood are currently working on their new album with producer Gil Norton – it is set for an early 2013 release. http://www.myspace.com/surferblood

About The Hindu Pirates
Hindu Pirates is a Huntington Beach-based band of five dudes, who are fusing garage rock and blues...definitely in the same vein as Fidlar, Allah-Las,The Soft Pack. All the members are 18-21 with the youngest of the bunch Giuseppe LoBasso who is fresh out of high school. They have all been friends since high school (that was only about 3 years ago for most of them), which is when they launched the band.

The guys recently opened for Delta Spirit and Tijuana Panthers at The Observatory and have also performed with Allah-Las, The Growlers, Har Mar Superstar, JJMAZ, Gantez Warrior and many other local standouts at big venues in OC and LA - The Smell, House of Blues, La Cave, The Satellite, Avalon, Detroit Bar, Constellation Room, Continental Room, etc., as well as festivals like Desert Daze and Eclectic Roots.

About Hurley
“Hurley is a company based on inclusion,” says chairman and founder Bob Hurley. This philosophy applied to Bob Hurley’s early years as a Huntington Beach shaper, working with friends alongside the world’s best athletes to make a better surfboard. It applied to the company’s launch in 1999, when Hurley decided to start a brand that was a true microphone for youth.

In 2002, Hurley was acquired by Nike — the largest and most influential sporting brand in the world. Inclusion remains a guiding principle of the company today, where innovative products like Phantom Boardshorts and game-changing events like the US Open of Surfing continue to redefine what is possible in our world. Hurley headquarters are in Costa Mesa, CA with international offices in Sydney, Tokyo, Barcelona and Bali. www.hurley.com www.facebook.com/hurley