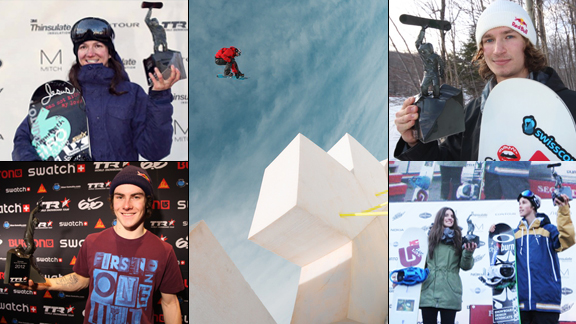 It will be a big year for competitive snowboarding. X Games Aspen will join the Arctic Challenge, the Beijing and Innsbruck Air & Style competitions and the Burton U.S. and European Opens as a 6Star event on the 2012-13 tour. X Games Tignes, also a 6Star event, will count toward Tour points for the 2013-14 season.

TTR also will co-sanction the 2012-13 USSA Grand Prix competitions as 5Star events. The Grand Prix has been elevated to FIS World Cup status this year, so those events will count for Olympic qualification points as well as points on the World Snowboard Tour.

"The X Games is one of the most important events to us," 2012 TTR Big Air champion Seppe Smits said. "It's great that it's a part of the World Snowboard Tour now. It's also relieving to know that with the Grand Prix serving as both Tour points and World Cup result, this gives us a little breathing room in an extremely packed season. We all prefer to ride the World Snowboard Tour events and appreciate the efforts of TTR to work on unifying the tour and making it less hard on us to plan."

The original dream of the "Ticket To Ride" tour, back when legendary snowboarder Terje Haakonsen founded it in 2002, was to unite the many independent snowboard events of the time under one tour umbrella, in order to crown one definitive snowboarding champion at the end of a season.

The structure of that tour has gone through a number of changes since then -- women have joined; there's now a one-to-six-star ranking system for events; discipline-specific titles in slopestyle, big air and halfpipe have been added; the TTR name has been dropped in favor of the World Snowboard Tour -- but the catalyst remains the same: to make all these events count for something more than just individual wins.

The Winter X Games have always stood apart from this, as if on an island where no other contest before or after really mattered. By becoming a part of the Tour, the X Games also become part of a larger narrative that, combined with other decades-old, highly prestigious events on the WST, will tell the true story of a competitive season.

On the TTR side, while other high-level events have straggled in and out of the picture over the years, the Burton U.S. Open has been the only 6Star event to continuously represent the Tour in North America. For this reason, interest in competing in the full circuit on what has largely been seen as a European tour has waxed and waned among North American riders. The addition of X Games Aspen to the WST lineup should increase the Tour's prestige dramatically.

And because riders on the top of the WST rankings will get X Games invites, the incentive to compete in the full tour will be that much higher.

As to why Tignes will count toward 2014's tour instead of 2013's, Tim Reed, senior director of content strategy for ESPN X Games, said: "X Games and TTR worked to include X Games Tignes as part of the 2013 World Snowboard Tour, but unfortunately X Games could not fulfill on all of the necessary event requirements for a final tour stop, so the collective decision was made to have X Games Tignes become the first event on the 2014 calendar. Needless to say, it will be a great way to kick off 2014 tour schedule."

Although it is not likely that the splitting-up of Aspen and Tignes X Games events between WST tour years will continue past this season, there is a benefit to the current division.

Those who have been following the dramatic ups and downs of TTR's attempts to negotiate with the FIS (skiing and snowboarding's official Olympic governing body) over Olympic qualification issues know that stacked competition calendars have been a massive stress for snowboarders hoping to get one of their country's team spots in the Winter Olympics. Riders are often forced to pick between Olympic-sanctioned FIS competitions and TTR events, causing them to miss out on the full TTR program once every four years.

With Tignes counting toward 2014 WST points, "What we're hoping is that, by getting the opportunity to achieve a 6Star result before the Olympics, riders see it as a way to alleviate some pressure," TTR executive board member Maria McNulty said.

The Olympic qualifying period is already under way. It kicked off in New Zealand in August and will continue until January 2014.