LA GRAVIERE, Hossegor/France (Friday, September 28, 2012) - The opening nine heats of Round 1 of the Quiksilver Pro France were completed today in clean three-to-five (1 – 1.5 metre) waves at the primary site of La Graviere.

Event No. 7 of 10 on the2012 ASP World Championship Tour season, the Quiksilver Pro France took advantage of solid barrels on offer this morning before calling competition off this afternoon as the swell subsided. 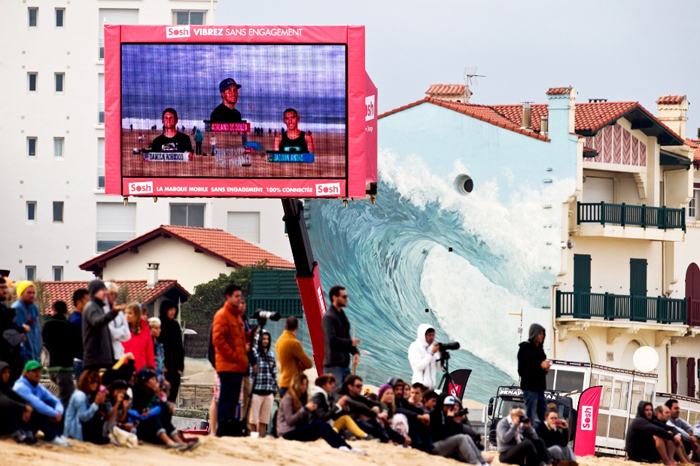 “In these kind of conditions, one wave can change the heat and you just hope you’re on that one,” Fanning said. “When they come through, there are great, little barrels to be had. France always has very strong wildcards so you want to avoid them at all costs. Winning in Round 1 is a start.”

Fanning advances directly to Round 3 of competition.

Dane Reynolds (USA), 27,former ASP WCT competitor and wildcard into the Quiksilver Pro France, caused the upset of the day, dispatching of current ASP WCT No. 2 Joel Parkinson (AUS), 31, and Bede Durbidge (AUS), 29, in Round 1 of competition.

“The waves were pretty fun out there when they came through,” Reynolds said. “It’s nice and spread out so Joel (Parkinson) and Bede (Durbidge) were kind of down on their own peak and I was up on my own peak which is always nice. I’m not much of a hassler. Competition is fun for me and I don’t put pressure on myself to do well. I do like to see how I perform in this environment though and that’s why I do these.”

Taj Burrow (AUS), 34, current ASP WCT No. 6, kicked off the day’s proceedings with an impressive displat of forehand tube-riding in the shifting low tide conditions to best opponents Kai Otton (AUS), 32, and Taylor Knox (USA), 41, and advance directly into Round 3.

“First heat of the morning is always a gamble,” Burrow said. “You don’t have a reference from the other heats and you’re not sure what the judges are going to throw. Lucky for me, the conditions this morning were fun little barrels and it always feels great to get through Round 1. There are some really dangerous wildcards in this event so I’d much rather be watching Round 2 than in it.”

Kelly Slater (USA), 40, reigning 11-time ASP World Champion and current ASP WCT No. 3, reactivated his event-winningequipment from last week at Lower Trestles today to collect an impressive array of barrels and advance directly into Round 3.

“Well I didn’t back-up my result in Fiji with on in Tahiti,” Slater said. “It’s tough at this level. There’s no doubt about that. I always enjoy France though. I’ve been coming here for so long that it really is like another home for me and I feel really comfortable out there. I was surfing on that same quad I surfed in the Final at Lowers last week and it’s been feeling really good so if it stays like this I may stay on it.”

While the ASP World Title remained the day’s primary focus, the requalification campaigns of the world’s best are also at a crucial point of the season and some of the lower ASP Top 34 seeds came up with big winsJadson Andre (BRA), 22, and Patrick Gudauskas (USA), 26, picked up important Round 1 wins today, hopefully altering the course of their respective 2012 campaigns.

“I’m so happy to get through Round 1,” Andre said. “I’m not thinking about the ratings. I’m just going out there to have fun, catch a lot of waves and hopefully that means I win. That’s my goal for this event – to focus on having fun.”

“A Round 1 win is definitely preferred,” Gudauskas said. “I feel like I’ve been surfing well this season but the results haven’t been coming. I have always had a great time in France and I’m really comfortable out here. I’m hoping to post two big results here before the tour heads back to California.”

With conditions deteriorating through the early afternoon, event organizers opted to call competition off for the day following Heat 9.

Event organizers will reconvene tomorrow morning at 8:30am to assess conditions for a possible 9am start.

Highlights from the Quiksilver Pro France will be available via quiksilverlive.com/profrance/2012/