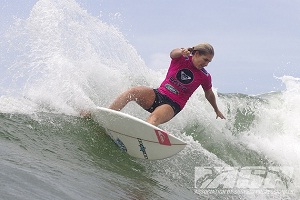 COOLANGATTA, Queensland/Australia (Monday, October 1, 2012) – With the culmination of the women’s qualifying season, ending with the ASP 6-Star SATA Airlines Azores Pro last weekend, the ASP Top 17 have been confirmed for 2013.

The ASP Women’s World Rankings rate surfers based on their top five results for the 2012 season from all ASP Star events.

The final position for the ASP Top 17 will be the ASP Wildcard, to be determined in the coming weeks.

The 2013 will first contest one another at the season-opening Roxy Pro Gold Coast next February.

If you enjoy reading the latest ASP News, we welcome you to subscribe. Simply enter your email address below and press submit to receive ASP news updates via email.