Having won all of the top crowns in women’s downhill ski racing, Lindsey Vonn has set her sights on a new goal: competing against the best male ski racers in the world. 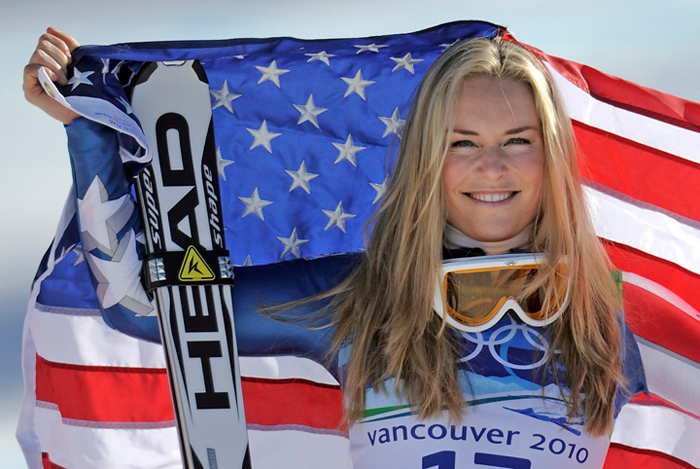 “I’d like to have one chance in my life to race against them,” Vonn said Sunday in a telephone interview. “Annika Sorenstam did it in golf and paved the way for women. I’m not asking for World Cup points. I’m not asking for any of that. I just want the chance to compete.”

The men’s downhill race in Lake Louise is the World Cup season’s speed opener. That same weekend, Vonn’s fellow female competitors will be in Aspen, Colo., for a series of races, which Vonn would forgo. The women will then head to Lake Louise the next week for the first speed events of their season.

This is where the matter becomes complicated. Vonn’s participation in the men’s competition might give her an unfair advantage in terms of preparation on that course for the women’s event.

Atle Skaardal, FIS’s ladies’ chief race director, has said, “In the case the council would allow Lindsey to start in men’s races, she cannot first race the men’s race and then the ladies race in Lake Louise due to World Cup rule Article 14.2: ‘No training shall be allowed on World Cup racecourses during the last five days prior to first training run or competition.’ ”

In a statement, the United States Ski and Snowboard Association said: “We greatly respect Lindsey for her accomplishments as well as her interest in this new challenge. But we have not yet had an opportunity to formally discuss it with Lindsey and FIS.”

“There’s two downhill races and a super G, so for the downhill title, for the overall title, those are very important races for me and I wouldn’t want to jeopardize that,” she said.

Mancuso, who finished fifth in the downhill rankings last season, said: “It’s too bad our race is the next week, because it is an unfair advantage and a rule that you can’t ski on the race hill. Other than that, I say, ‘Lindsey, you go, girl.’ ”

FIS will decide on Vonn’s request at its next meeting, scheduled for Nov. 3 and 4.

Vonn has won the downhill in Lake Louise 9 times in 11 years. Last year, she won both of the women’s downhills in Lake Louise. Her time of 1 minute 51.35 seconds in the second downhill of the series was nearly two seconds faster than Marie Marchand-Arvier, who was second. That time would have put her in 64th place — third from last — in the men’s race the weekend before, though the men’s and women’s downhill courses are not exactly the same.

“There are some commentators who think that I would be far outside of the men,” Vonn said. “Everyone’s entitled to their opinion, but I’d like the chance to compete against them and see where I stand. I’d definitely like to be inside the points, in the top 30.”

Steven Nyman, an American downhiller who would potentially compete against Vonn, said: “I’m all for it. She’s the most dominant woman in downhill in years. And if she thinks she can beat the boys, then great, go ahead. I believe she should have the right to compete against the boys and see where she stacks up. But also let her start with the boys, not as a forerunner on a smooth course but in the pack. She should start where she finishes in the training runs.”

In ski racing’s speed events, a racer’s start position in a competition is determined by how well he finishes in the training runs.

Now the United States Ski and Snowboard Association must file a formal request with FIS, which it has not yet done, said Riikka Rakic, a spokeswoman for FIS. The American association was informed Sunday of this formality by FIS.

“This is something I’ve always wanted to do,” Vonn said. “I’ve always tried to push my skiing to the next level. I’m always trying to find a new challenge, and this is definitely that challenge.”

(a version of this article appeared in print on October 8, 2012, on page D8 of the NYTimes' New York edition with the headline: Vonn Seeks ‘One Chance’ to Race Against Men)