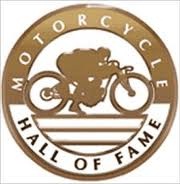 In addition, two existing members of the Hall of Fame will be honored as Legends at the event: 1998 inductees Malcolm Smith, a pioneer in off-road motorcycling, and Mert Lawwill, the 1969 AMA Grand National Champion. Both Smith and Lawwill starred in the iconic motorcycling documentary "On Any Sunday," directed by Hall of Fame member Bruce Brown.

The AMA Legends Weekend also includes one of the country's leading motorcycle shows and the finale of one of the most thrilling AMA-sanctioned national racing series. On Saturday, Nov. 17, the Red Rock will host the 2012 AMA Motorcycle Hall of Fame Dave Mungenast Memorial Concours d'Elegance, featuring many of the country's most impressive original and restored classic motorcycles. That evening at the nearby Orleans Arena, fans can catch the last round of the 2012 GEICO AMA EnduroCross National Championship Series.

The AMA Legends Weekend will be held at the Las Vegas Red Rock Resort, Casino and Spa, a world-class retreat featuring a range of entertainment, dining and family-friendly attractions. The facility's expansive ballrooms provide a stunning backdrop for the AMA Legends Weekend.

Ticket information for the AMA GEICO EnduroCross on Saturday evening is available at www.endurocross.com.

For a complete schedule of the AMA Legends & Champions Weekend, including information about tickets and room accommodations, visit www.americanmotorcyclist.com/events.

About the American Motorcycle Heritage Foundation
Founded in 1990 by the American Motorcycle Heritage Foundation, the goal of the AMA Motorcycle Hall of Fame Museum is to tell the stories and preserve the history of motorcycling. Located on the campus of the American Motorcyclist Association in Pickerington, Ohio, the Museum's three major exhibition halls feature the machines and memorabilia of those who have contributed notably to the sport. The AMA Motorcycle Hall of Fame Museum recognizes individuals who have made significant contributions to motorcycling, including those known for their contributions to road riding, off-road riding and all categories of racing, as well as those who have excelled in business, history, design and engineering. More information can be found at www.motorcyclemuseum.org.