VANDENBERG AIR FORCE BASE, Calif. (AP) — A surfer was killed Tuesday by a shark off a beach at coastal Vandenberg Air Force Base following a summer of shark sightings along the Central California coast, authorities said.

Francisco Javier Solorio Jr., 39, of Orcutt, was killed in the attack off the coast of Surf Beach in Lompoc, the Santa Barbara County sheriff's department said in a statement.

He was bitten by the shark in his upper torso. 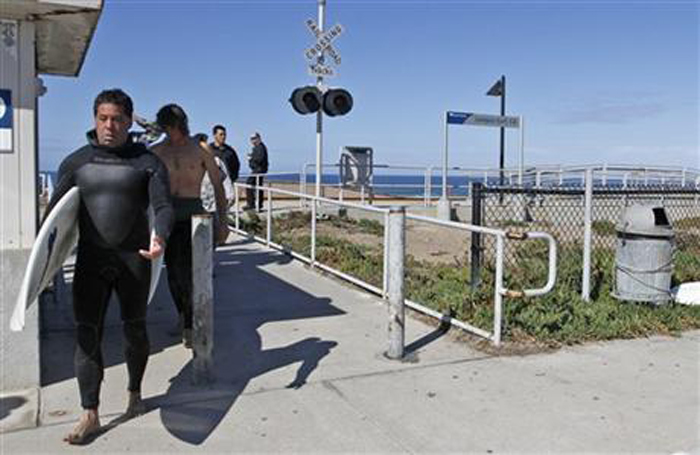 Surfers who were surfing with the 38-year-old victim of a fatal shark attack exit Surf Beach in Lompoc, Calif. Tuesday, Oct. 23, 2012. The attack was reported by another surfer about 11 a.m. off the coast of Surf Beach, the Santa Barbara County Sheriff's Department said in a statement. (AP Photo/The Santa Maria Times, Leah Thompson)

Solorio "had a friend who he was surfing with who saw the shark bite or hit the man," said sheriff's Sgt. Mark A. Williams. "His friend ended up swimming over and pulling him from the water where he received first aid."

The friend started first aid while another surfer called for help, but Solorio was pronounced dead by paramedics at the scene.

The Air Force said he was not affiliated with the base, which allows public access to some of its beaches. All beaches on the base's coastline will be closed for at least 72 hours, as a precaution, Col. Nina Armagno said Tuesday evening.

The type of shark involved and other details were under investigation.

It was the latest shark attack fatality at Surf Beach, about 150 miles northwest of Los Angeles.

In October 2010, Lucas Ransom, a 19-year-old student at the University of California, Santa Barbara, died when a shark nearly severed his leg as he body-boarded.

Hundreds of miles south near the coast of San Diego, a 15-foot great white shark is believed to have killed triathlete David Martin in 2008.

There were no shark warning signs posted at Surf Beach on Tuesday, said Lt. Erik Raney, adding that beaches don't typically post such notices unless the location had a recent shark sighting.

"We've had shark sightings up and down the Santa Barbara coastline pretty frequently recently," said Raney, adding that the sightings are well-publicized.

Last month, warning signs were posted at Santa Barbara Harbor, about 65 miles southeast of Surf Beach, after a 14-foot great white shark was spotted by a surfer.

In July, a man escaped injury near Santa Cruz after being thrown from his kayak by a great white shark that bit through the vessel. An almost identical incident occurred off the coast of Cambria in May.

Death by shark attack is rare. An average of 65 shark attacks occur each year around the world that typically result in two or three deaths, according to the Pew Environment Group.