About 8.5 million households from Maine to Michigan to North Carolina, representing about 7 percent of the country’s population, lacked power Tuesday afternoon, officials said.

Here are the state-by-state figures from The Associated Press:

As searches revealed grim scenes up and down the Eastern Seaboard, the overall death toll from the storm had climbed to 38, officials said.

Here are the state-by-state totals, reported by The Associated Press on Tuesday afternoon, with two deaths not listed:

Off the coast of North Carolina: 1 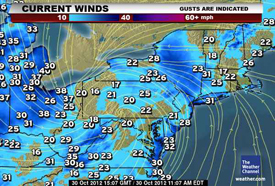 Gov. Chris Christie of New Jersey appeared on a half-dozen morning talk shows on Tuesday to outline the difficulties his state still faced in the aftermath of the storm.

There were 2.4 million without power in the state, a “devastated Jersey Shore,” “almost no power in the city of Newark” and many people stranded in areas where waters breached protective barriers.

He said the cost to the state was, at the moment, “incalculable.”

“We are in the midst of urban search and rescue,” he said on CNN, describing the situation in the borough of Moonachie in Bergen County as tidal floodwaters overwhelmed a natural berm.

Hundreds had been rescued so far in the area, he said, but the search continued in an area where high waters threatened residents of trailer parks who had clambered to the roofs and awaited rescue. “Those are the folks that were most in danger,” Mr. Christie said, adding that those living on higher ground or in two-story homes could get to higher ground.

He also spoke of the situation in Atlantic City, sharply criticizing Mayor Lorenzo Langford for sending “a mixed message” to residents by telling them they could safely stay in the city after Mr. Christie had ordered an evacuation.

“That was the wrong thing to do,” he said, and now “urban search and rescue” was continuing in the city on Tuesday morning.

On a subsequent appearance on the Fox News Channel, Mr. Christie was asked whether he had plans to tour storm-ravaged areas of the state with Mitt Romney, the Republican nominee for president who is supported by Mr. Christie. 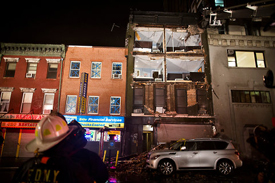 More than 5,700 flights have been canceled on Tuesday, bringing the total number of cancellations caused by the storm to 15,500, according to FlightStats.com. That surpasses the disruptions from Hurricane Irene, which caused 14,000 flight cancellations in August 2011.

The three major New York airports remained closed Tuesday morning. Airlines hope to resume service to and from New York by Wednesday afternoon. Travel experts say it could take several days, or even into next week, for passengers to be rebooked.