SKATE: Documentary "Four Wheels and a Board in Kabul' to be released November 2012 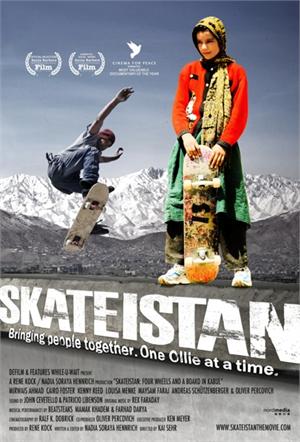 KABUL – This thought-provoking, full-length documentary tells the story of how girls and boys in Kabul discover skateboarding and make it their own, bringing about the birth of the grassroots NGO Skateistan. ‘Skateistan: Four Wheels and a Board in Kabul’ also includes exclusive footage from a visit to the project by the first professional skateboarders to visit Afghanistan: Louisa Menke, Cairo Foster, Kenny Reed and Maysam Faraj.

The film is the winner of the 2011 Cinema for Peace Berlin award for Most Valuable Documentary, among other strong receptions at several International Film Festivals. This surprising story holds significance to skateboarders around the world, the international aid community, educators, and anyone curious about Afghan culture.

Skateistan is an NGO using skateboarding as a tool for youth empowerment in Afghanistan, Cambodia and Pakistan. Now in its fifth year of operations, Skateistan is excited to have these stories from its beginnings to share with a worldwide audience. The organization hopes the film will shed light on some of the daily realities of life for youth in Kabul, and the ability of four wheels and a board to connect people across innumerable social divides.

The film will be available in the US Nov 13th 2012 on iTunes, Amazon Instant Video, Google Play, Vudu, and Xbox Live. It premieres in theatres this month in Hamburg (Nov.8th), Düsseldorf (Nov.13th), and San Francisco, and will be released worldwide on DVD soon.