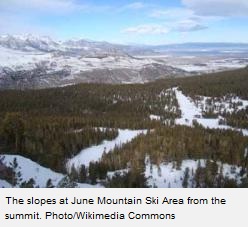 “We're going to open it up,” he said during an interview. “We submitted our operating plan to the Forest Service and now we’re waiting for approval, and part of that operating plan is letting them know that we intend to open it as normal for the 2013-14 season.”

It is in essence a re-launch of the ski area, which is owned by Mammoth Mountain. Gregory said Mammoth would take the year to more clearly hone June Mountain’s mission and to target its marketing base.

“Carl Williams [the general manager of June Mountain] is going to working closely with the community on working to define a more clearly-identified market niche for June,” Gregory said. “That will involve both the Mountain and the community.”

As of now, Gregory said June would be a destination for “young families.”

What that means in specific terms, Gregory said, is still up in the air.

“You’ll be hearing a lot more of that in the weeks and months to come.”

The news of the re-opening did not exactly achieve the magnitude of the news of its closure for the current 2012-13 season, which was made last spring in the heels of a near-disastrous, snow-starved season for both June and for Mammoth Mountain.

“We haven't made a big deal about it, not because it isn't big news,” Gregory said, “but because we've got a lot of work to do and make sure we have our plan down and approach the community in the right way.”

Gregory made his remarks about June Mountain n a wide-ranging interview that touched on a number of topics, mostly centered on Mammoth Mountain in the days leading up to its Opening Day, scheduled for Thursday, Nov. 8