SUNSET BEACH, Oahu/HAW – North Shore surfing legend Sunny Garcia has won the HIC Pro at Sunset Beach, replicating a win he enjoyed here 20 years ago in the early stages of his storied career. Today he accepted the victory while holding his baby grandson, who shares his name. Garcia says his win today is the perfect primer to launch his bid for a 7th series title at the Vans Triple Crown of Surfing, which starts on Monday.

Moments after stepping foot on the sand he thanked his fans for supporting him all these years and helping him to live the dream.

“I want to thank all of you out there who have supported me and continue to support surfing,” said Garcia. “It’s because of you that I’ve been able to live the dream for so long.

“For an aging athlete that’s so used to being at the top and winning, it really is hard when you get old and you see all these young guys doing good and kicking your butt… I’m just glad I still get to compete against these young guys and beat them every now and then.” 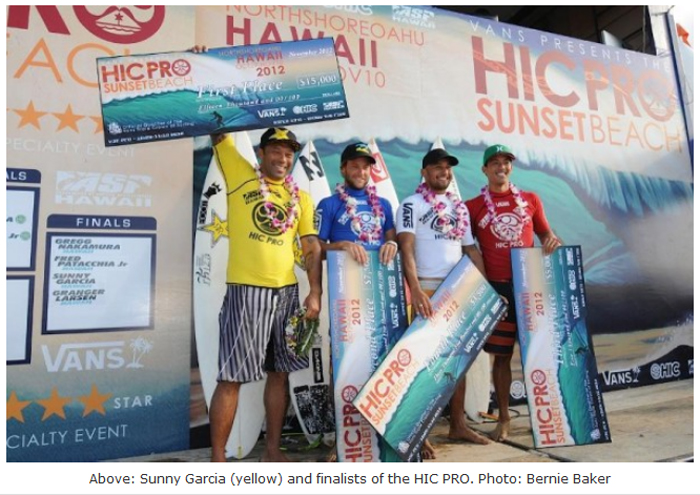 Garcia and runner-up Granger Larsen (Maui) surfed through five intense rounds of competition today in overhead waves. Running out of steam, Garcia knew he’d have to strike early in the final and his plan unfolded perfectly. He caught the first wave of the heat and racked up two huge hacking turns for an 8.5. A second score of 6.33 at the 8-minute mark sealed the deal and he never looked back.

“In the quarters I was dying … I wanted to quit and (caddy Billy Kemper) was just screaming ‘c’mon paddle!’ And I’m like, ‘I have no more gas!’ In the semis he was in the channel yelling ‘c’mon you got this!’, and I’m like ‘what are you screaming about?! I’m doing everything you’re telling me!’ (laughs).

“This is the one time of year I feel like I can come home and win the Triple Crown.

The day I don’t feel I can win the Triple Crown, is the day I’m going to stop. For now I feel like the waves are big and I feel like there are very few people that can compete with me if I get good waves. I feel good. I feel really, really good right now.”

Larsen, 22, was locked in a battle for second with Honolulu civil engineer and occasional competitor Gregg Nakamura and eventually got it in the closing minutes of the heat.

Nakamura’s result was nothing short of inspirational. A relative “nobody” on the pro surfing scene, he surfed through nine rounds this week and went from an obscurity to a local hero.

“To be in the final with Sunny and Fred was amazing,” said Gregg. “Who would have imagined?”

Fourth-placed Fred Patacchia had a wave-starved experience in the final and could offer little more than a head shake and a laugh as he returned to the beach.

The attention of the surfing world now turns to the Vans Triple Crown of Surfing presented by Vitaminwater. Monday, November 12, is the first official day of the series that will run all the way through December 20.