All schedules are subject to change and the ASP will continue to release information regarding event confirmations and scheduling when appropriate. 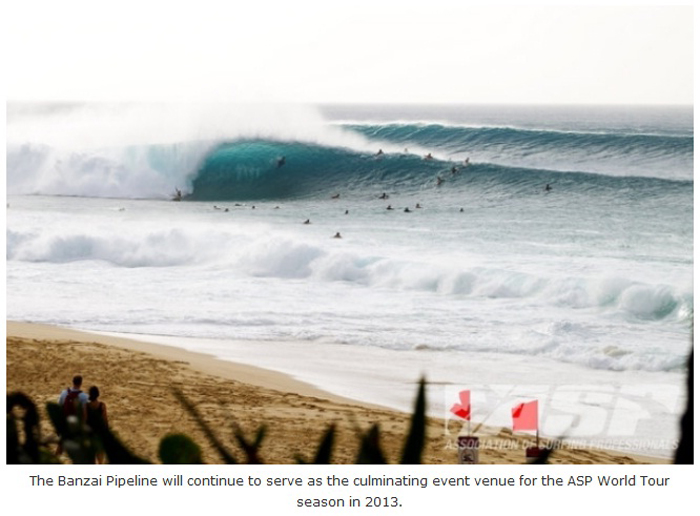 A full 2013 schedule can be accessed HERE

The 2012 ASP season will conclude with the ASP World Longboard Tour events in China, the Swatch Girls Pro China hosted by Wanning and the Citic Pacific Shenzhou Peninsula Pro, as well as the Vans Triple Crown in Hawaii, comprised of the Reef Hawaiian Pro at Haleiwa, the Vans World Cup of Surfing at Sunset Beach and the Billabong Pipe Masters.

All LIVE surfing action can be accessed via www.ASPWorldTour.com

Dane Jordan, ASP Australasia’s General Manager has been involved in a number of events at the world-class left hand pointbreak, and is excited to return and see the athletes battle for precious ASP World Championship Tour qualification points.

“I love going back to China!” Jordan said. “We scored perfect waves at this event last year. All the surfers including myself were comparing the Ghost Hotel section of Riyuewan Bay to a left hand version of Kirra, which is one of the best compliments ever. It’s great to see the support and interest from the people of Hainan, the government and businesses continue to grow.”

Glen Hall (IRE), currently rated 18th of the ASP World Rankings, started his best competitive year to date with a win at the 2012 Hainan Classic and is already excited to return for the 2013 edition.

“I loved my time in China earlier this year,” Hall said. “The waves were insane and the contest was a full success. The people were welcoming, the culture was interesting and waves were as good as anywhere in the world. It’s definitely a new surf destination and one I’m looking forward to going back to.”

ISA President Fernando Aguerre has been at the helm of the International Surfing Association since 1994 and has been a driving force in promoting surfing around the globe and is thrilled to return to China in 2013.

“This will now be the second consecutive year that the ISA will run the ASP Men’s 4-Star Hainan Classic,” Aguerre said. “Our partners at Womei Advertising, led by its CEO, Mr. Yang Dunhao, have once again delivered all of the financial and political resources needed for the 2013 Hainan Wanning Riyue Bay International Surfing Festival, incorporating the Hainan Classic and it is set to be one of the most important events on the global surfing calendar next year. The opportunities for the development of surfing in China are endless, and the continuation of this event will continue our path in the right direction.” 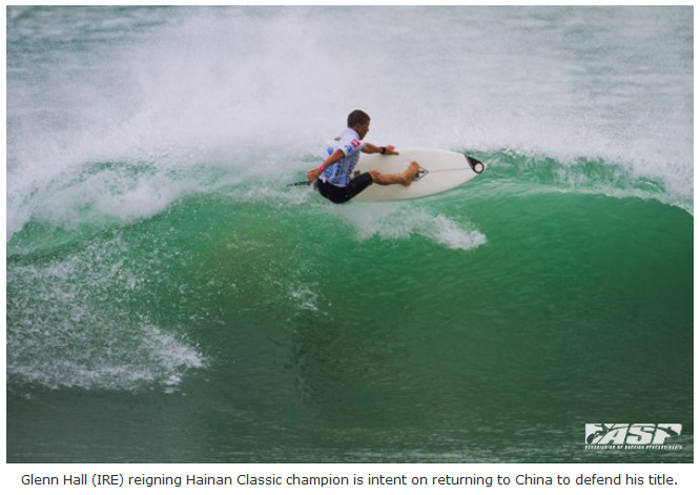