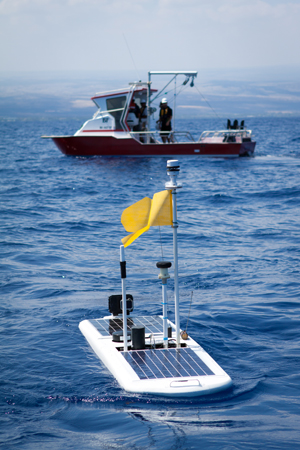 During Papa Mau’s journey, he weathered gale force storms, fended off sharks, spent more than 365 days at sea, skirted around the Great Barrier Reef, and finally battled and surfed the East Australian Current (EAC) to reach his final destination in Hervey Bay near Bundaberg, Queensland, Australia. He traveled through and measured over 1200 miles of a chlorophyll bloom along the Equatorial Pacific. These blooms indicate proliferation of phytoplankton that is fundamental to ocean life and climate regulation. While typically monitored through satellite imagery direct validation of chlorophyll blooms at this resolution provides a groundbreaking link between scientific modeling and in-situ measurement of the Pacific Ocean.

“To say we are excited and proud of Papa Mau reaching his final destination is an understatement,” said Bill Vass, CEO of Liquid Robotics. “We set off on the PacX journey to demonstrate that Wave Glider technology could not only survive the high seas and a journey of this length, but more importantly, collect and transmit ocean data in real-time from the most remote portions of the Pacific Ocean. We’ve demonstrated delivery of ocean data services through the most challenging ocean conditions. Mission accomplished.”

An important aspect of the PacX program is the PacX Challenge, a competition designed to encourage scientists and students to make use of the PacX data in interesting, productive, or innovative ways. Research abstracts were submitted from around the world to compete for the grand prize award of a $50,000 research grant from BP and six months of Wave Glider data services.

“Liquid Robotics is proud to announce the PacX Science Board has selected five outstanding finalists to compete for the PacX grand prize,” said Luke Beatman, Oceanographer at Liquid Robotics and chairman of the PacX Science Board. “These scientists will conduct research into some of the world’s most challenging ocean issues ranging from measuring the ocean’s health and respiration to studying the ocean’s biomass - the most fundamental organisms critical to ocean life.”

The five PacX finalists are:

Closely following Papa Mau’s arrival in Australia is the second of the Australian PacX ocean robots, named Benjamin. He is expected to land in early 2013. One of the pair heading for Japan, Fontaine Maru, is returning to Hawai’i for repair and will continue his journey to Japan once complete. To follow their progress, please visit http://www.liquidr.com/pacx/.