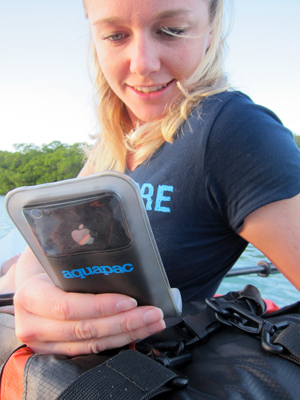 Designed to showcase  individuals whose accomplishments highlight the perfect blend between conservation and recreation, the Aquapac Outdoor Champion is awarded $1,500 in cash from Aquapac in recognition of her achievements and to support her future endeavors. The winner also receives a healthy selection of Aquapac’s 100% waterproof cases and bags.

“We are delighted to award Emily Penn as our Aquapac Outdoor Champion. Her efforts to clean up the environment and educate others are truly inspiring,” said Tim Turnbull, CEO of Aquapac. “Emily exemplifies our Outdoor Champions program —people who strive to help others to connect to the great outdoors and instill a greater conservation ethic in all of us.”

Penn’s passion for conservation includes an endless education and outreach effort designed to promote the use of alternative fuels. She now organizes and leads expeditions to tackle challenges facing the marine environment.

Penn learned to sail in challenging conditions at a young age. She spent time at the helm over four oceans in preparation for her RYA Yachtmaster exam. She was the recipient of the Yachmaster of the Year by HRH Princess Anne and is currently running Pangaea Explorations, taking scientists and filmmakers to remote parts of the planet via the sailing vessel “Sea Dragon.”

Check out the full interview with Emily via Aquapac’s blog at aquapacblog.blogspot.com.

ABOUT AQUAPAC:  Aquapac is a London-based company, with U.S. headquarters in East Norwich, N.Y.  It produces 100% waterproof, 100% use-through cases that create a virtual second skin for personal electronics, photography equipment, maps, documents and other essential items. Aquapac was started in 1983 by windsurfers needing to waterproof their Sony Walkmans while on the water. See www.aquapac.net.