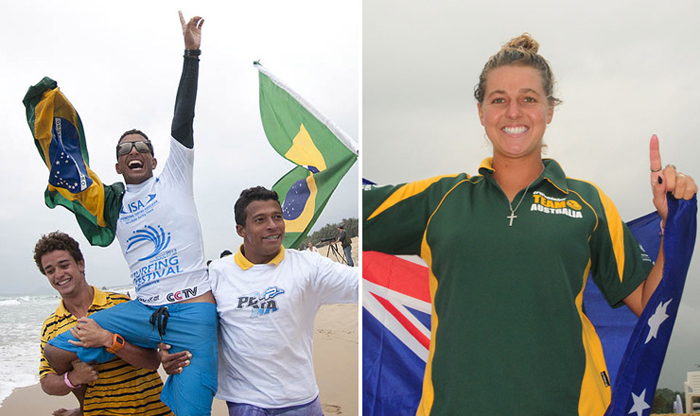 Wanning, Hainan, China - The International Surfing Association is pleased to announce the winners of the 2013 ISA China Cup.

With a powerhouse team in both the Men and Women’s draw, Australia won the Team Gold Medal for the second consecutive year in the ISA China Cup. Brazil placed a close second, earning the Silver Medal, Hawaii won the Bronze Medal, and France took the Copper Medal to complete the team results.

In a dramatic end to the Women’s Final, Hawaii’s Alessa Quizon was in the lead with the clock winding down and Gold in her sight, when she dropped in on her fellow surfer and was called for interference. This untimely move caused Quizon to drop to second place, allowing Australia’s Phillipa Anderson to take the win. Anderson (15.26) got the Gold Medal, defeating Quizon (12.56), Nikki Van Dijk (AUS, 8.53) and Nage Melamed (HAW, 6.40).

“I’m very happy and satisfied about the hosting of the ISA China Cup for the second year in a row. While the waves were not as strong as last year’s event, the athletes have provided a great show of surfing abilities,” remarked ISA President Fernando Aguerre. “I’m totally excited about the potential for surfing in China, and certainly proud of our partnership with Womei, in the bringing of both ISA and ASP competitions for two years in a row. Congratulations to all and each member of the participating national surfing teams for coming to China and to all medalists for making history for surfing in China. Finally, I would like to express my gratitude to the people and government of China, and to our partner Womei, and all the sponsors for joining us in this great event.”

Michael Rodrigues, Men’s Gold Medalist was speechless about his win. “I am so happy and I don’t have words to explain what I am feeling,” commented Rodrigues. “I have no sponsors, so I came here to win only representing my country. Just being here was already great and with the victory it is even greater, I am very happy, thank you!”

Women’s Gold Medalist, Phillipa Anderson selflessly remarked, “We didn’t really care about individuals we just wanted to get the gold for Australia so this helps a lot.” 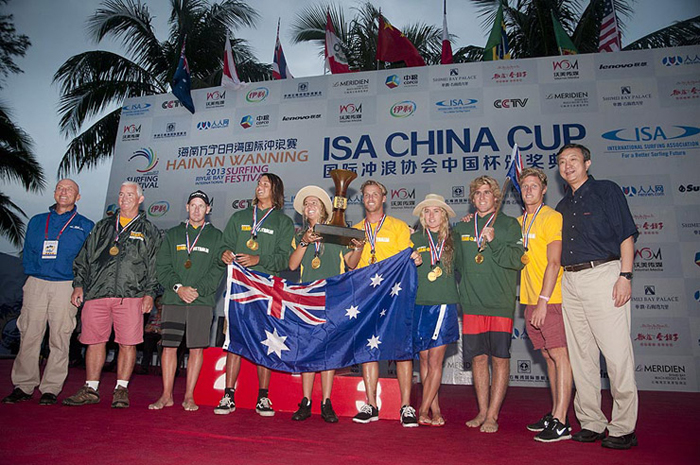 Australia’s coach, Martin Dunn remarked about his winning team,“We brought a mixed bag of experienced WQS surfers and some young surfers who we think are going places in the sport,” remarked Dunn. “We came here and we expected the waves to be similar to last year with the long left hander and unfortunately that didn’t occur, but to be successful, you have to able to surf anything and its great that our surfers proved that.”

January 28, marks the start of the second part of the Hainan Wanning Riyue Bay International Surfing Festival, the Hainan Classic, 4-Star, Men’s ASP. With a prize purse of $95,000 US, the competition will take place from Monday, January 28 to Wednesday, January 30, and will feature the best surfers in the world, including defending Champion and 2013 ASP World Tour surfer Glenn Hall (IRE), 2000 ASP World Tour Champion Sunny Garcia, plus 10 Chinese surfers, by far the most ever in the history of any international surfing competition. This is a testimony to the success the ISA is already having in the short term to fulfilling its mission to develop global surfing, and to developing surfing in China.

Official Forecaster, Surfline, has predicted for the ENE swell to pulses up a bit more with 2-3’+ faces, and larger sets in the 4’ range over the afternoon, for a 7:30am call and likely start at 8am at the main break, the left point st Riyue Bay.