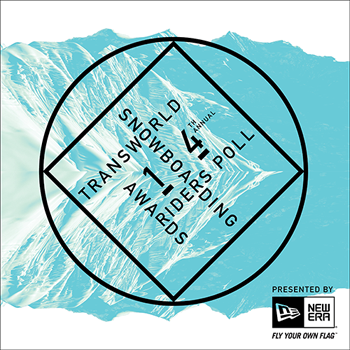 Denver, CO — Snowboarding’s top riders came out to the Fillmore Auditorium on Friday night for the 14th Annual TransWorld SNOWboarding Riders’ Poll Awards Presented by New Era. Emcee’s GT and John Jackson presided over the ceremony—the biggest off-snow event in the industry—as the best riders of 2012 took the stage in recognition of individual progression and style in both riding and videography. To be recognized in this capacity by one’s peers is one of the highest accomplishments in snowboarding. Winners are determined by polling over 100 top pros to get their take on the best riding, video parts, and tricks of the year. Congratulations to all the nominees—here are the winners.

Thank you to this year's sponsors and congratulations to all of the winners. The 14th annual TransWorld SNOWboarding Riders' Poll Awards Show was presented by New Era. Additional sponsors this year included: Red Bull, Go Pro, Keystone Resort, Zumiez, Protect Our Winters, and Pabst Blue Ribbon.