SURF: The Quiksilver King of the Groms is Back with All-Digital Global Qualifier 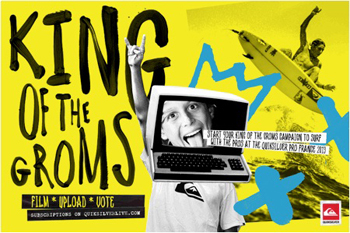 The Quiksilver King of the Groms surf competition has been the leading stage for international surfers ages 16 and under for the past twenty years. This year, the contest is getting a radical new online format which will largely increase the talent pool of the world’s most exciting young surfers by bringing the competition into the digital stage.

Surfing hopefuls from all over the globe will have the opportunity to qualify for the world final by posting a video of their surfing exploits online at www.quiksilverlive.com. The field has been thrown wide open, now allowing for more competitors in the continental qualifiers than ever before. The new digital format will also create an online community of budding talent, along with exclusive content for participants to share. Competitors will be divided into 10 worldwide regions and their clips will be voted on first by the public, and then by a panel of legendary professional surfers in each region.

The finalists from each region will have the fortune of competing in the world final scheduled during the Quiksilver Pro France, September 27 to October 7, 2013.

The worldwide regions will be broken down as follows:

Three Wildcards
This year, three Team Quiksilver ambassadors will collect a wildcard to compete in the international final: Jack Robinson (Aus), Kanoa Igarashi (USA) and Leonardo Fioravanti (Ita). The talented trio, who have already taken part in several major competitions, will be sharing their qualifying experiences on Facebook and Twitter.

How to take part in the Quiksilver King of The Groms
From February 15 to June 30, young surfers everywhere are invited to post videos of their best waves on the event website at www.quiksilverlive.com. Clips should be no longer than 90 seconds. Entrants are encouraged to use their imagination and originality to showcase their best performance in the water and their personal philosophy on life.

The first week in August, the 20 surfers with the highest number of "Likes" in each region will be pre-selected for the next stage of competition. Their videos will then be submitted for the scrutiny of our professional judging panellists, who will choose the winner(s) for each region. Altogether, 18 surfers will go forward to the world final of the Quiksilver King of the Groms in France (15 selected + 3 wildcards).

Who are the judges?
The Quiksilver King of the Groms has a long-standing association with some of the biggest names in the sport, such as Aritz Aranburu and Tom Carroll. This year, each region will have its very own team of judges from the world of surfing (pro surfers, photographers, competition judges, etc.).