COOLANGATTA, Queensland/Australia (Thursday, February 28, 2013) – Association of Surfing Professionals International (ASP) is excited to announce the appointments of Paul Speaker as ASP CEO and Kieren Perrow as Interim Commissioner. The announcements are made as ZoSea Media finalizes its acquisition of the world’s premier surfing organization.

The new announcements come as the 2013 ASP World Championship Tour (WCT) season gets underway in Australia. Speaker and Perrow will both be on site at the activities including tonight’s ASP World Surfing Awards. 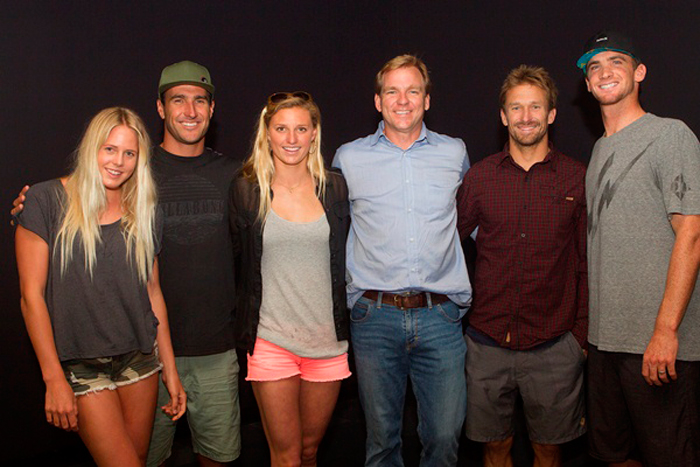 Paul Speaker joins ASP with a well-respected background in sports and entertainment. His executive management tenure includes serving as Director of Marketing and Ideas at the National Football League, President of Time Inc. Studios, and President of RKO Studios where he has been responsible for the organizations’ creative development, advertising and organization-wide integration of marketing strategies. Speaker also recently stepped down as Lead Independent Director for Quiksilver as part of the organization’s board of directors. Speaker’s focus during the current season is establishing an infrastructure to continue to build the ASP as a global sports league.

“The surfers, the events and the current ASP staff have all been, and will continue to be, instrumental in elevating the sport during this transitional year,” Paul Speaker, ASP CEO, said. “Our focus this season is protecting the interests of professional surfers, preserving the integrity of competition, refreshing the ASP brand and establishing a new commercial model for the sport. The ASP will be more fan-centric – the structure of tours, the production of broadcasts and everything in between will be geared towards enhancing the fans’ experience. Good luck to all our competitors and events in 2013 and we look forward to taking this next step with you.”

Kieren Perrow, ASP Top 34 surfer and long-serving ASP Board Member, has been appointed ASP Interim Commissioner in 2013 by his fellow surfers and the ASP. As Perrow is still competing on the ASP WCT this season, he will utilize his years of experience at the elite level of competition to ensure a recognized surfing skill set remains influential in direction of professional surfing. The Office of the Commissioner will exist as the authority on all technical aspects of the sport including judging, venues, scheduling and rankings, among other components of professional surfing. As the new Interim Commissioner, Perrow’s primary responsibility will be to maintain and preserve the integrity of competition.

“It’s a huge honor to be appointed to this position at such an important and pivotal point in the sport’s history,” Perrow, ASP Interim Commissioner, said. “We have a lot of work ahead of us, but the cooperation and collective focus coming from all elements of the tour, from surfers to events to staff to new management, is hugely motivating and a major driving force as we evolve the sport.”

All ASP stakeholders, surfers, events and ASP staff are supportive of the transition and enthusiastic about the road ahead.

“The performance of the ASP stakeholders, the surfers, events, Board members and ASP staff has been most admirable throughout this transition,” Richard Grellman, outgoing ASP Executive Chairman, said. “Paul Speaker and his team bring with them an impressive collective of knowledge and experience and it’s clear to me that their priority is the betterment of the sport of surfing. This has been, and will continue to be, the chief directive of those who govern the ASP. It’s a very exciting time for the sport and this season will set the tone for the next evolution of the organization.”

The first stop on the 2013 ASP World Championship Tour will be the Quiksilver and Roxy Pro Gold Coast from Queensland, Australia. The 2013 season will continue as planned as the new ASP executive leadership prepares for the 2014 season.