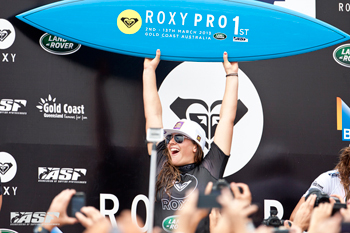 Event No. 1 of 7 on the 2013 ASP Women’s World Championship Tour (WCT), the Roxy Pro Gold Coast enjoyed a down-to-the-wire finish today with Wright and Fitzgibbons going head-to-head in a fiercely-fought Final.

Despite Fitzgibbons holding the lead for the majority of the heat, Wright secured a wave in the dying moments and tore it apart for a 9.20 out of a possible 10, taking the heat lead and the win.

“I don’t even know what to say right now,” Wright said. “I wasn’t even thinking out there. I was singing to myself and when I came in, my sister said ‘I was singing right along with you’. That little wave came in and hugged the bank and I just left it all on the wave. To get the score and the win like that, it’s incredible.”

With a win at the opening stop of the year, Wright takes the initial lead in the hunt for the 2013 ASP Women’s World Title, but the young natural-footer is focused on enjoying the moment for now.

“I’m not even thinking about the world title,” Wright said. “I had a rough season last year and I took a good break over the off-season, got a motorbike and just relaxed. To come back and get a win in the first event, it feels great and I’m just going to enjoy it.”

Fitzgibbons, 2012 ASP Women’s World Runner-Up, was one of the form surfers of the event and transferred that form into the Final. However, the young South Coast surfer permitted Wright to take the heat-winning wave from under her priority, a mistake that would cost Fitzgibbons dearly.

“It’s a hard one to swallow when you lose like that,” Fitzgibbons said. “Tyler (Wright) is such a strong surfer and she trains really hard and she pulled it out on that final wave so congrats to her. Not the result I wanted, but still a strong start for me so I’ll just regroup and focus on the next one.”

Fitzgibbons holds the current ASP Women’s World No. 2 spot heading into the second event of the season.

Carissa Moore (HAW), 20, 2011 ASP Women’s World Champion, continued with her brand of progressive ripping at the opening event of the season, but it was not enough this morning in her Semifinal clash with Fitzgibbons.

“It was tough out there today,” Moore said. “I definitely didn’t pick the right waves and there weren’t that many to begin with. Congrats to Sally (Fitzgibbons) though. She was surfing really well. Semifinals is a good result to start the year and I’ll look to build upon that over the course of the next few events.”

Stephanie Gilmore (AUS), 25, reigning five-time ASP Women’s World Champion and 2012 Roxy Pro Gold Coast winner, was the favorite heading into this year’s opening event and her form until the final day was near flawless. However, the hometown natural-footer was ousted from competition this morning in her Semifinal bout against an in-form Wright

“I put together a pretty good event until this point,” Gilmore said. “I haven’t surfed Snapper that much in conditions like this so that definitely played a factor. My wave selection wasn’t on today and Tyler (Wright) is so talented that I shouldn’t have let my guard down with her. Sometimes a loss for me is good though – it lights a fire under me and makes me appreciate the wins that much more.”

The next stop on the 2013 ASP Women’s World Championship Tour (WCT) is the Drug Aware Margaret River Pro in Western Australia from March 16 – 24, 2013.