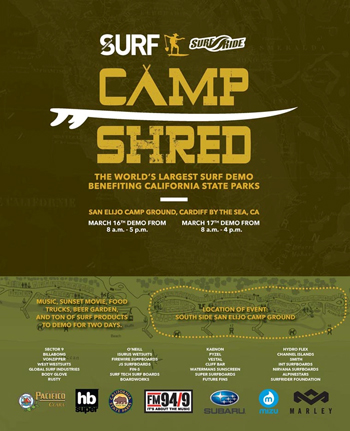 Carlsbad, CA—Mark your calendars as TransWorld SURF and SurfRide host its first-ever "Camp Shred" surfing demo event at the San Elijo Campgrounds in Cardiff By The Sea, California next weekend, March 16 and 17. The demo will also include live music, entertainment, food trucks, and a beer garden, and will be taking over the entire South end of the San Elijo Campgrounds. Sponsors for the TransWorld SURF and SurfRide Camp Shred include Suburu, Pacifico, House of Marley, HB Super, Mizu, and 94.9 F.M. Radio. In addition, thanks to the support of Suburu and Pacifico, proceeds from the event will also be benefiting California State Parks and the Keep-A-Breast Foundation. The event is free and open to the public and will run from 8:00 a.m. to 5:00 p.m. on Saturday and from 8:00 a.m. to 4:00 p.m. on Sunday.